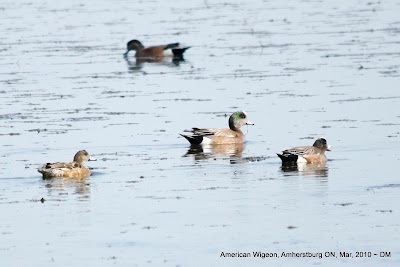 I attended a family friends' birthday party in Amherstburg today, so I left a little early and stopped by Holiday Beach to check out the ducks on Big Creek. I was shocked at how low the water was! I kayaked Big Creek last June and well, from Holiday beach, it looked like mudflats!You would not be able to launch a kayak into it!!! Big Creek closer to the bridge on Highway 18 had a little more water, but seemed very shallow as well.

I snapped a photos from the side of the road thinking they were just mallards and to my pleasent suprise... Lifers! I've never seen the green-faced, white crowned american wigeon! Upon looking up this duck on Allaboutbirds.org , I was amazed that its range is really on the western side of the continent. It only stopped here in migration. http://www.allaboutbirds.org/guide/American_Wigeon/lifehistory

Some Northern Shovelers were out as well. 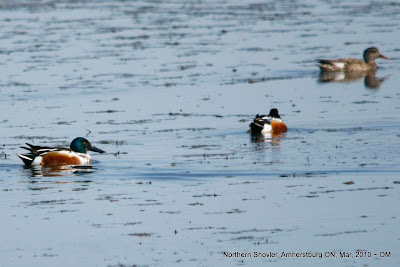 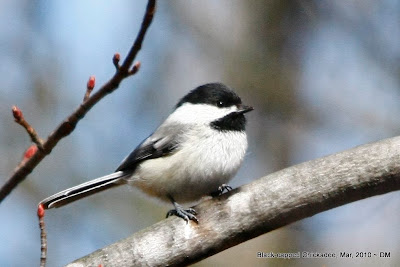 I've birded Riverside Drive once or twice in the last week.... and nothing! Hardly a single duck anywhere to be seen! I had thought there would be many to see once the ice melted, but that seems to just not be the case.  I walked around Ojibway park today and did not see anything out of the ordinary. Actually, I did see an anusual amount of Golden Crowned Kinglets. I'm not sure if there was always that many, or if they are migrating northward already. 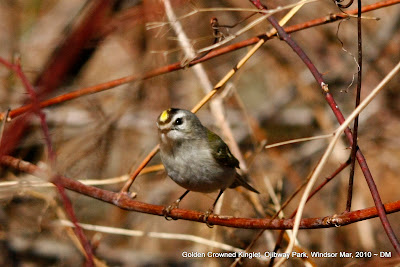 Wow,  I photographed about 80 bird species during two major birding outings in Florida and added 40 new species to my life list. I have not officially updated my list yet, but below I have about 40 new species that I've never officially seen. The image below is a link to a google picassa web album of about 80 photos.

Posted by dwaynejava at 6:11 PM No comments: 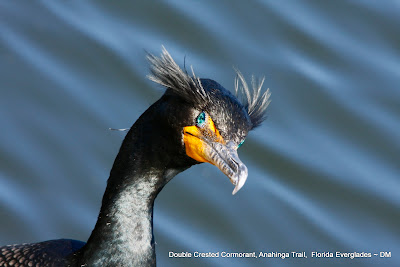 I spent the last week of my life in Florida! I spent three days in Orlando and Three days in Miami... So naturally I bugged my wife to go to the famous Merrit Island Nature Reserve and the Everglades. I must have photographed,,, I'm thinking 75 species of birds and 30 or so new to my life list. There is so much I could write about... but I have to keep this posting short. I will add three blog postings to break up the birding adventures. 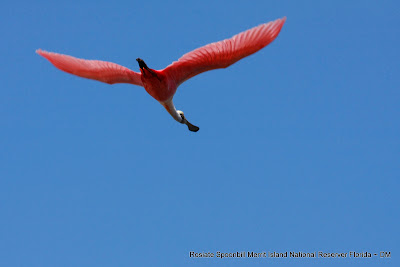 I have several shots of a Roseate Spoonbill both in flight and foraging in shallow water. I saw and photographed pretty well all the herons/egrets (except for black/yellow crowns). Merrit Island was incredible! 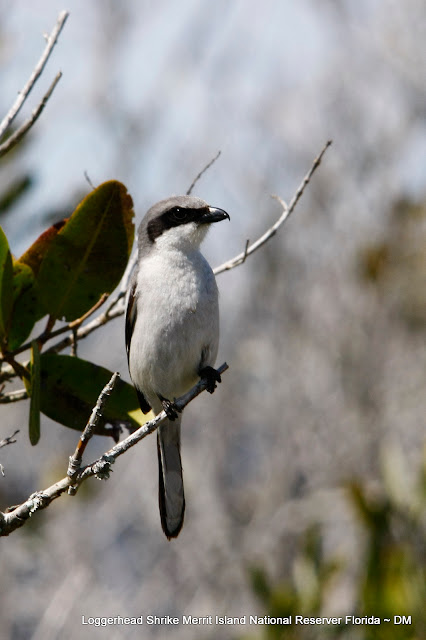 Just driving into the city of Titusville, I photographed so many birds. Loggerhead Shrike were on telephone wires, Ibis on the side of the roads, shorebirds galore...


The Florida Everglades was awesome as well. I stopped at three major points along the way but my favorite surprisingly was a stop called 'Long Key Pine'. I did not have the fanfare of Anahinga trail, but just standing in the parking lot I must have seen 10 bird species with almost no effort! Male and female Eastern Bluebirds, YBSS (see below), Great Crested Flycatcher ...check. 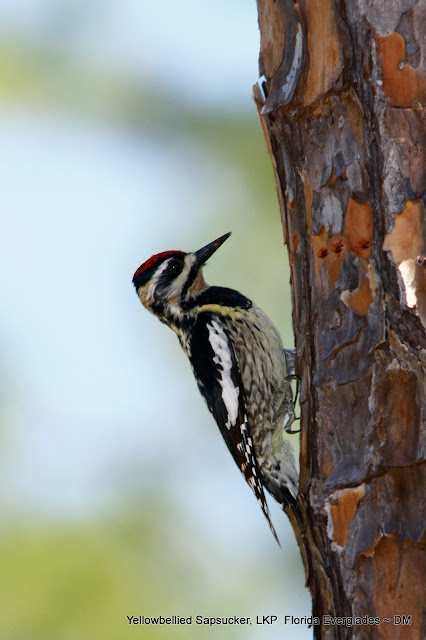 I'm happy to be back home. I look forward to the week by week migration wave that is upon us as we speak! 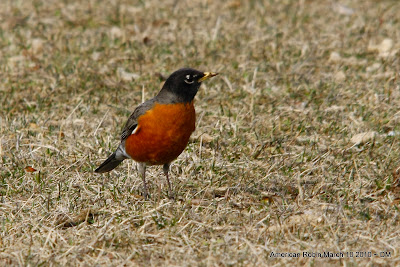 My birding for this week was pretty dull. I drove down Riverside Dr. in Windsor on the way home from work a few days ago and stopped by Lakeview Marina. I noticed a trumpeter and mute swan in a distant flotilla of ducks near Peche Island. On my way home, I stopped by goose-bay park and photographed a pair of Bufflehead and an American Robin... the first for the year! Just as I was photographing the ducks, clouds rolled in...Good photography needs good light.... I did catch a little bit of iridescence from the male Bufflehead though... 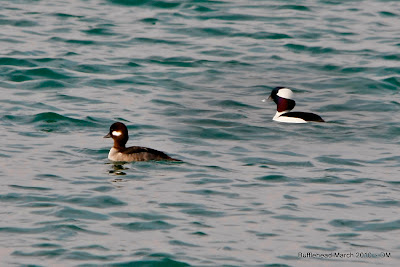 A few birds I would love to see this month are a Red-breasted merganser, Eastern Bluebird... possibly a good Northern Flicker in good light. Common Loon would be awesome as well!  I think with all the ducks I've photographed and two or three gull species, ... I'm finally in the +100 birding life list club!

I'm also in the market for a kayak so hopefully soon I will have some herons, bitterns and some shore birds. 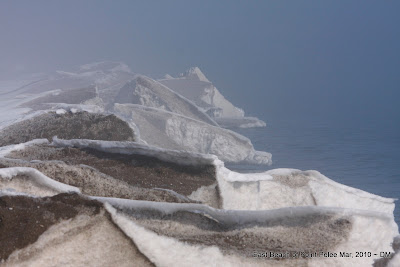 Point Pelee may be one of the top ten birding spots in North America, but outside of the spring and fall migrations, its not really any better than any typical Carolinian forest. I guess the nice thing about it is that it has several habitats (forest, water, swamp & grassland) so you typically get a few more birds on a trip here than to your local park.


Point Pelee is almost 1 hour from my house, and I must say I often get home and feel underwhelmed from my trip. I just don't seem to see the rarities that others rave about, such as a grey catbird, northern mockingbird,... I still havent seen a Carolina Wren...
What I did see are the typical winter species... Black Capped Chickadee, Cardinal, Downy & Red Bellied Woodpeckers... I photographed a pair of Common Mergansers and my first real ID on a Black Backed Gull. I haven't really gotten into gulls, but this was a pretty neat photo. 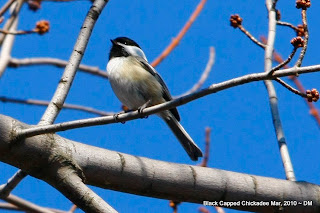 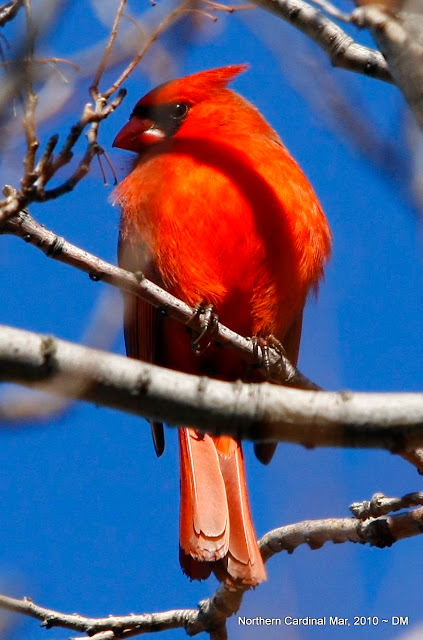 Not particularily great photography...I'm practicing for May...
Can you spot the Black Backed Gull below? 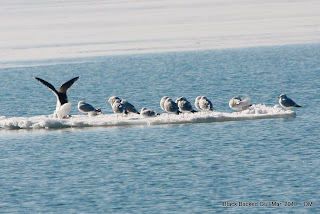 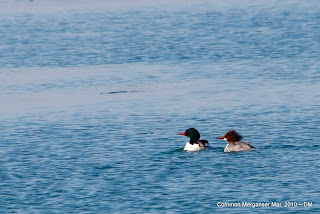 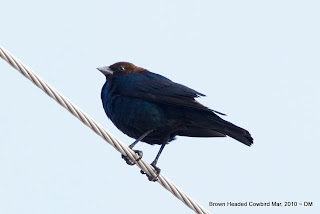 True to the seasonal migration charts, I noticed this Brown-Headed Cowbird on the North Dyke Road outside Point Pelee. I also noticed some iridescent Common Grackles in Point Pelee as well. 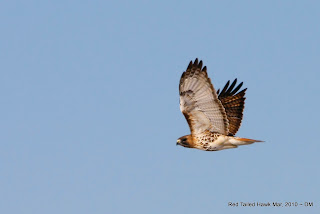 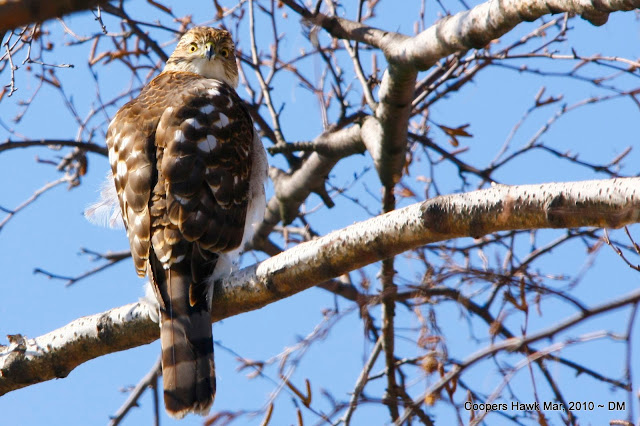