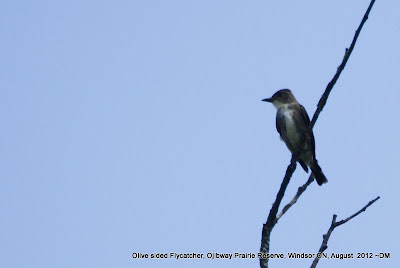 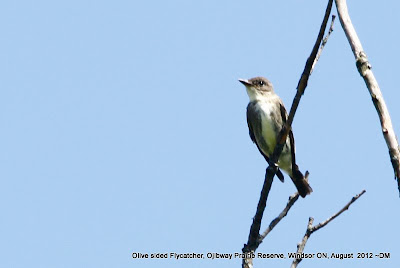 After work today, I drove to the Ojibway Tallgrass Prairie for a relaxing walk. I was hoping to see some interesting butterflies, but did not really see any rarities. (Monarch, Buckeyes, Eastern Tailed Blues, Pearl Crescent etc.) I really had been hoping to find an Olive sided Flycatcher this season, and recent sightings by Blake Mann and Paul Pratt reminded me that indeed, they are in season! I was not expecting to see one at Ojibway tonight, but to my utter amazement, one was perched at the top of a dead, leafless tree in the Ojibway Tallgrass Prairie! I am quite confident that I'm identifying it properly, I had mis-identified some Eastern Pewees in the past as Olive sided Flycatchers. This bird was large, had barely visible dusky wingbars, perched at the top of any tree it was perched in. I wish I had heard its call ("quick three beers"), but it was not vocalizing.

The Olive sided Flycatcher is yet another species at risk. According to ROM, its status is "Special Concern Provincially, Threatened Nationally". See http://www.rom.on.ca/ontario/risk.php?doc_type=fact&lang=&id=329 for more details. According to the Ibird App on my phone, it indicates that breeding bird surveys are showing alarming negative trends. Its estimated that its population has declined 72% between 1966-2002! Its a life bird at #305. The MNR has another PDF fact sheet here: http://www.mnr.gov.on.ca/stdprodconsume/groups/lr/@mnr/@species/documents/document/276684.pdf 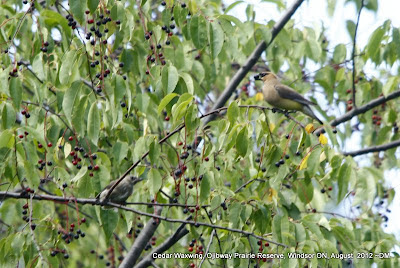 
While walking back to my car, I noticed a tree that was loaded with berries, and birds! Cedar waxwings were flying in and out of this tree, and a Vireo and BG Gnatcatcher were seen as well.

I took the photo below while picking up my son at my mother in laws house. It was in a residential neighborhood!


PS: This was a posting from Sunday that I never published, but will add as a post-script to this posting. 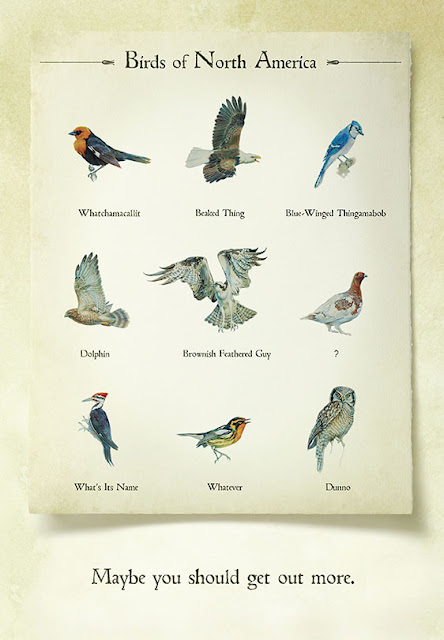 While waiting to get my hair cut last week, I noticed a bird-related Subaru advertisement behind the cover of a recent Macleans magazine. I went to take a photo of it with my cell phone, but realized I left it in my car. This week, the ABA had a blog posting about the ad, so I couldn't help but re-post.


I was hoping to see an Olive-sided Flycatcher, but no luck! Maybe the birding gods are punishing me, with no lifers in several months! 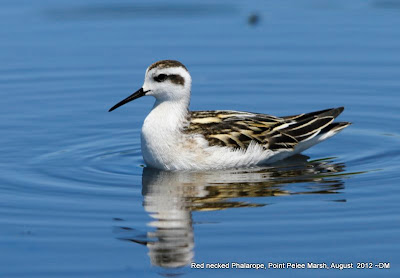 With numerous Ontbirds postings over the last week about Red necked Phalaropes I figured I would make an attempt (my last for the season) to kayak Point Pelee's Marsh (Lake Pond) and find them myself. Sure enough, a pair was spotted at one of the first "Islands" that I visited. The black streak across the eye is easily seen from great distance! One of the two Phalaropes had some golden highlights in its plumage, and the other was monochromatic. 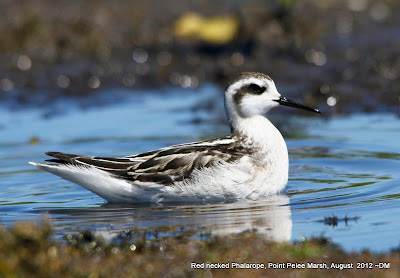 Like I've said many time before, it seems shorebirds ignore people when they are in a kayak. I was about 5 meters away from these two Phalaropes, a Greater Yellowlegs and a few Semi-Sandpipers. At one point, they flushed because of a Northern Harrier that flew by, but then returned immediately.

Some birds that I saw today (Saturday) include:

Perhaps more diversity could have been found by navigating to other areas of Point Pelee's Marsh (see map), such as West and East Cranberry Pond, but as usual, I only had a few precious hours to bird on Saturday.
Butterfly Watching

A ditch on the nortwest side of the road leading to Point Pelee had about 20 meters of Purple Loostrife and many butterflies had taken notice. Whites, Sulphurs, Painted Lady, Monarch, Common Buckeye, Grey Hairstreak, Fiery and Sachem Skippers were all present.

Earlier on in the week, I had photographed this Duskywing below. I had heard about some duskywings having a plume on their hindlegs, so I thought I had found something interesting here.  An online book I found while researching (Butterflies of Canada) mentioned that the following duskywings have such plumes: "Male duskywings of Icelus (Dreamy Duskywing - Too late in the season), zarucco, Funeralis, Persius (Persius Duskywing), Lucilius (Columbine), Afranius (Afranius Duskywing), and Baptisiae (Wild Indigo) have hair plumes on their hindlegs. So, considering the time and location, I think its just a Wild Indigo that had its wing oriented with the sun in a way to show some really nice iridecsence. The four white spots are hardly visible in this photo, but in others they are visible from the underside of the forwing.

Some of my best birding trips in my short three years of birding have been at Holiday Beach (Warblers peaking on Labour Day Weekend), and today gave me a little taste of what is to come over the next two or three weeks. Since May was a such a letdown in the warbler department, I look forward to enjoying vireos, flycatchers and warblers, as well as Raptors on their Southbound migration over the next month. Holiday Beach is one of North America's best Raptor Migration hotspots. 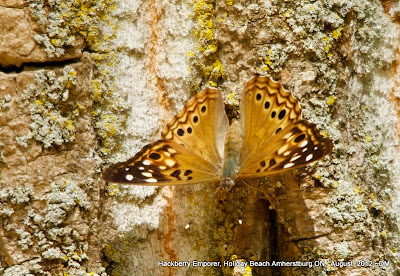 Some birds seen at Holiday Beach include: 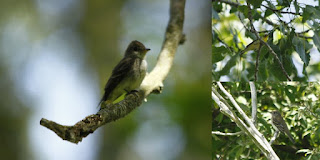 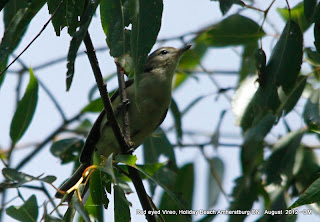 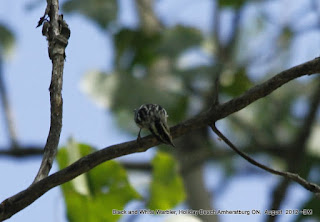 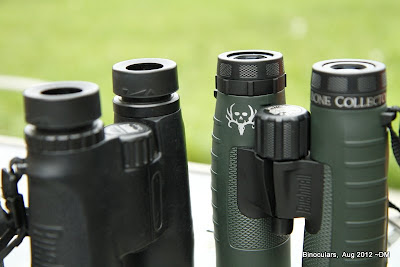 About two years ago, I purchased my first pair of binoculars, Bushnell Sportsman 10x42s! I've been really impressed with them, but my recent intrest in butterflies highlighted their main shortcoming, the close focus distance of over 7 meters! Amazingly, I only paid $30 for those binoculars! They were marketed at Nascar Fans that might pick up a pair of bright roof-prism binos at Wal-mart in the states. (My new binoculars are marketed towards hunters... I can't afford binoculars marketed to birders). The old pair of binos will be my spare binos that I leave in my trunk just in case!

This week, I picked up a pair of Bushnell XLT Trophy binoculars, which were only $150. They are a little brighter than my original pair, and colours seem a little brighter, but they are a little heavier. The close focus distance of these binoculars is only 2 meters, so they are much better for butterfly watching. I really think that if you take any pair of 10x42 roof-prism binoculars you have a great tool to go birding. Check out the optical specifications for $500, $150, $30 binoculars. The XLT wins on all measures except for weight!

Birding has been slow, although I did notice a (juv?) Humingbird perched in my backyard near my feeder, as well as my first southbound Warbler, which was associating with some Black Capped Chickadees today. 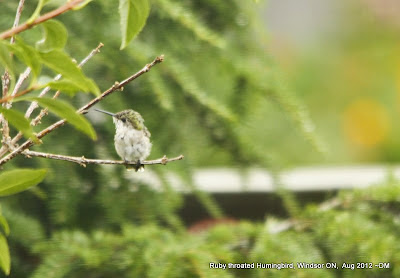 Posted by dwaynejava at 10:13 PM No comments:

I've started a tradition over the last two or three years to kayak Point Pelee's Marsh in August. This is a nice way to witness the fall migration of shorebirds very close-up. I was hoping to see a rarity, such as a Phalarope or Avocet, but no such luck. Pretty much what I've seen in previous years was seen this week: 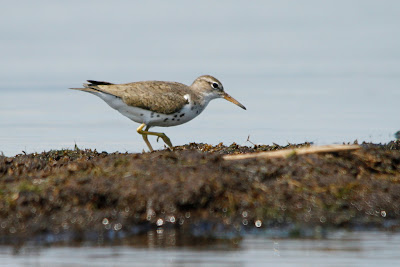 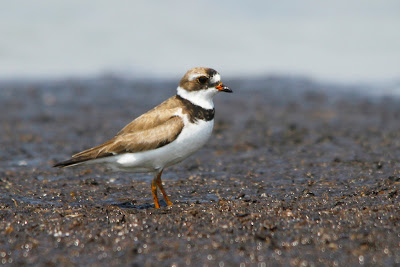 Semipalmated Sandpiper. Its funny to think that as recent as last summer, I had some minor confusion with this species and Sanderling. Rest assured, I've ironed out the differences and will no longer be confused! 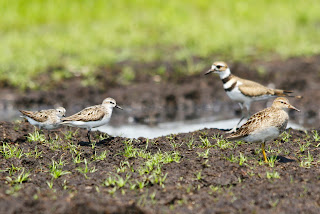 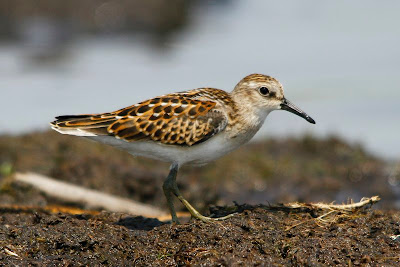 I've walked alot at Spring Garden (as mentioned in my last posting) but butterflies diversity has not really changed, or seems to be tapering off (between broods?). I did see a pair of Variegated Fritillaries though, which was exciting to see... I don't think any former butterfly counts for Ojibway had that species, so that's pretty significant to see so many there! Other butterflies there are Pecks, Fiery, Dainty Sulphur, Common Buckeye, Eastern Tailed Blue, Wild Indigo Duskywing, Least skippers, Crossline Skipper and Checkered Skipper.

The photo below shows a pair of Skippers that I noticed at Wheatley Beach this week. When I was at the beach, I had noticed some Common Sootywings and a few skippers,  and figured I would ID the skippers when I got home. They turned out to be Sachem Skippers! Pretty rare... In my opinion at least! I would have taken more care in photographing them, but I figured I was looking at something common! Other butterflies included Common Sootywing and many Sulphurs. 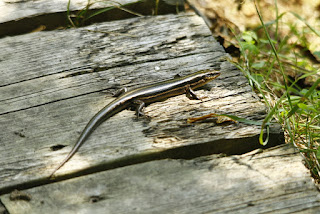 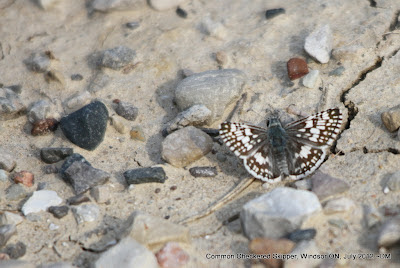 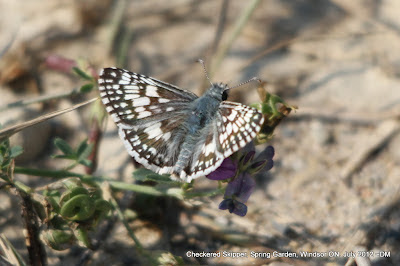 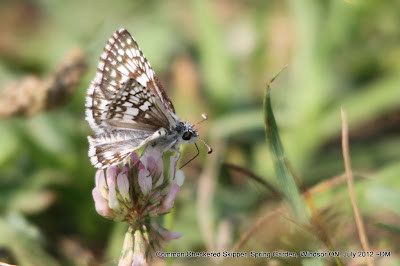 Ojibway's Spring Garden area in West Windsor has been reputed as an excellent area to go butterfly watching.  It is excellent because it has great habitat mix: Forest, Grassland, Hills, floodplain, and Turkey Creek which runs through it. Its a pleasure to walk the paths and watch butterflies while hearing distant Carolina Wrens, Tufted Titmouse, Belted Kingfisher and more. Recent walks have given good views of:

Not butterflies, but pretty cool!