For the last three or so years, I've tried to do some shorebirding in late August at Pointe Mouillee (pronounced "puent moi-yee" - French for wet point) in Rockwood Michigan. I've had some awesome shorebirds here in the past... Marbled Godwits, Red Knots, Buff breasted Sandpipers and Phalaropes. Its about 30 minutes south of Detroit but right across the river from Amherstburg [Google Map, Gov Site, Gov Map]. 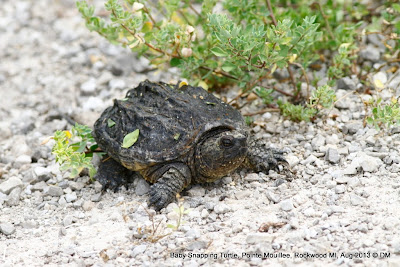 This huge 4000 acre wetland has a man-made dyke that the US Army Engineers are using to store contaminated sediment from the Rouge River. I've learnt from experience that if you go, you need to bring a bike, water, granola, hats... Be prepared for a rigorous journey, because you are biking like 4 Miles (6.5KMs). I find that even with hat, water and snacks, I somehow get heat stroke when I go, but maybe I'm just out of shape! 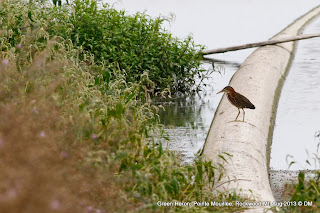 A birder that I met out there asked me if I use E-bird, and I replied... "I want to"... Its just so daunting. I must have seen over 50 species though! 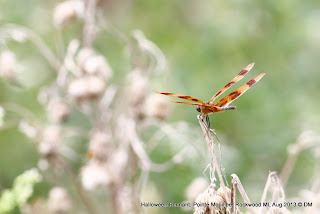 I will try to bird Pelee on Labour Day weekend, and then frequent the Holiday Beach Migration Observatory heavily during the fall. I also have 5-6 bird postings on the back burner. I'm just really busy right now with work and night school. Stay tuned!


PS: I missed the Wheatley Brown Pelican, as I waited till Saturday morning to go see it (work). My son & I, along with Jeremy Bensette tried for it but found out it had gone back to Cleveland! 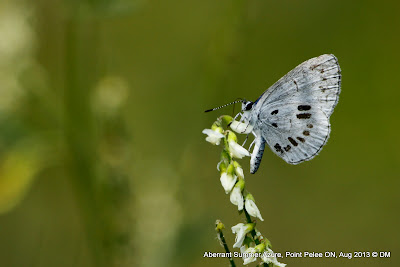 Last weekend, I went out to Pelee in an effort to meet up a few friends that were birding the park. I was late getting there and ended up walking west beach footpath on my own. I found this aberrant Summer Azure along west beach, oddly enough, on the same plant that hosted the Olive Hairstreak a few days before!  I later showed the image to 'A-Worm' and he quickly shattered my hopes of this being perhaps a silvery blue or maybe a cherry gall azure. He simply described it as being an aberrant Summer Azure. This blog [link] seems to have found the same aberrant version of this summer azure. The blog mentions that its not uncommon to have smearing or stretching in the ventral wing maculations of coppers, blues and hairstreaks.

Later, I kayaked the Pelee Marsh. I've done this now for the last three summers in August, and  get a great chance to see some shorebirds up close. No major rarities this time around, although I guess a nice look at Wilson's Snipe is always nice. 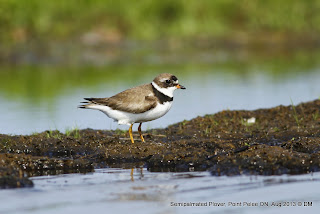 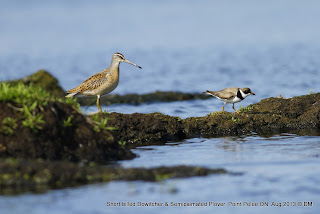 Late August is a great time to get out and see shorebirds, or to visit a natural area and see the late summer wildflower show! 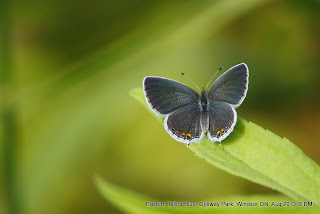 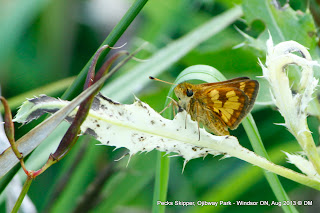 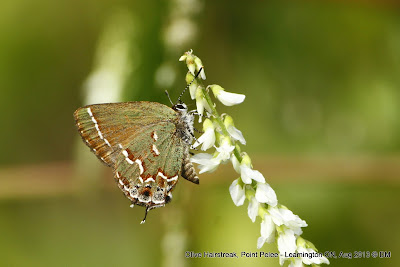 A recent posting on the Ontario Butterfly Watchers Google Group mentioned that an Olive Hairstreak was seen near the Point Pelee Visitor Center and it really got me wanting to try for it myself. I figured my chances of finding this butterfly, this late in the season was very small...Trying for it was basically a Lepidopterist's Leap of Faith. Another amazing thing about me finding this today was that I had my 1-year old son with me, so I was walking down the west beach path rockin' a stroller! Amazingly, my son simply fell asleep and did not get a single mosquito or fly bite. I think it was just too windy for either today! Upon leaving the trail, I did a quick tick check on my son, and noticed that he was covered in grass seeds. If you shook him off over some tilled dirt, you would have gotten a tall-grass prairie! Needless to say, it was very exciting to find this beautiful butterfly today. Thanks to Blake and Sarah (from PPNP) for advice on seeing this butterfly. I was looking at Junipers along West Beach but simply found this nectaring on a trail-side wildflower. I might have not seen it unless it alighted from one stem to another as I walked by.

Juniper Hairstreaks are basically restricted to two sites in all of Ontario. Point Pelee and an area near Kingston in Eastern Ontario.  This source rates the Juniper Hairstreak as S2- (Imperilled) in Ontario... So its pretty rare!

Other butterflies seen along west beach trail were 4-5 or so fresh, dark-form Easter Eastern Commas. Eastern Commas can be distinguished from Grey Commas by the nice mix of reddish brown colours on the underside of the wing, plus a very crisp C-shaped silver marking. Giant Swallowtails were very present as well along West Beach with about 10-12 in the first 300m south of the west beach parking lot.

A few days ago, I was butterfly watching at Ojibway and noticed two or three birds zooming by me. I was standing at the edge of a meadow, and I noticed an Eastern Wood Pewee perched. When I got home, I was happy to see another one behind it. I think this is a fledgling with its mother! Very cool to see, as I have heard that Eastern Wood Peewees, (although pretty common in eastern deciduous forests) are declining. It was nice to see a bird not feeding a brown headed cowbird as well. I've seen several such occurrences lately, particularly with chipping sparrows. 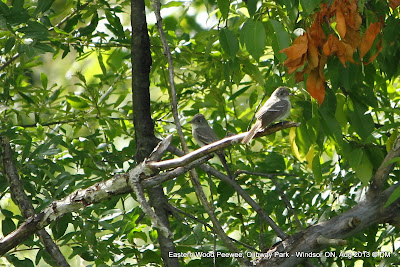 PS: Anyone know what flower the Juniper Hairstreak is nectaring on? Is it nodding ladies tresses orchid (Spiranthes cernua)?(*** I realized later that it was nectaring on White Sweet Clover***) 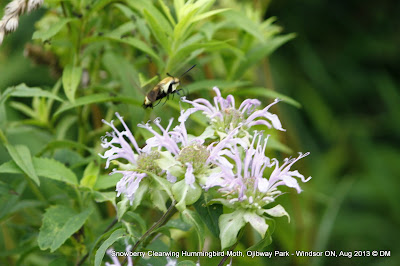 On the way to my parents house tonight, I stopped by Ojibway Park for a quick walk. I had been seeing Broad winged Skippers lately and wanted better looks. Upon walking up to a small meadow in the Spring Garden area of Ojibway, I saw a Hummingbird Clearwing Moth to my right, then to my left, I noticed another Clearwing Moth, ... with more of a yellow-black colouration... Snowberry Clearwing Hummingbird Moth?!?!?!? Are you kidding me?  I literally have two frames of this moth and it was gone.  Its funny, if you approach them very slowly, they seem to not mind your presence, but if you make a quick movement, such as move a camera strap, they can be a little shy.

I saw another Clearwing Moth moments later as I was leaving. Its funny, once you "see" a new species, your seem to then see it more easily from that point on.

It seems like butterfly life has really died down a little ... are we between broods? I did get some really nice looks at Broad winged Skippers though... I have male and female and dorsal ventral combinations... See below! 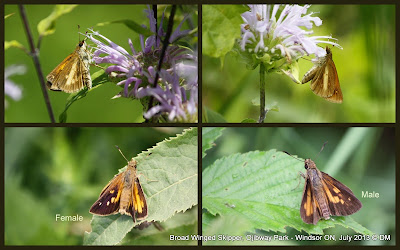 Branded Skipper Butterflies are a little difficult to identify because there are some strange wing positionings. The two photos above show a male and female dimorphism, but it is more clearly seen in the dorsal perspective. The dorsal perspective though, for skippers can be strange because skippers hold their forewings up at a 45degree angle, so depending on the angle you are looking at the butterfly, you may see the upper forwing on the right, and the upper hindwing on the left. I don't know if I'm explaining that very well, but I think any butterfly watcher has to come to terms with that sooner or later! 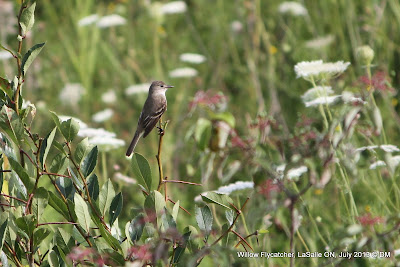 I took my son to a playground near my sisters house this week, and noted several birds:
25 brown headed cowbirds (I hate seeing big groups of cowbirds :-(  )
15 Starlings
10 Goldfinch,
25 Barn Swallows,
2 Song Sparrows,
Willow Flycatcher! (to my amazement)

Regarding Willow Flycatchers, I must say I am delighted to find them. I usually hear their scatchy call then try to find them perched atop a small bush or shrub... I only see them a few times during the summer in more expected areas such as Hillman Marsh. Not easy to find close to Windsor, but I may be mistaken on that... 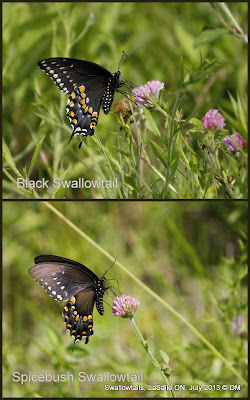 That playground had a few housing lots slated for development with lots of weeds. These two beauties flew by me in the mater of a few minutes. The top being a Black Swallowtail (see that small dot at the very bottom of its wings?) and a Spicebush Swallowtail, which has no "dot", and the band of orange dots is pierced by the blue colouring. Very cool eh? 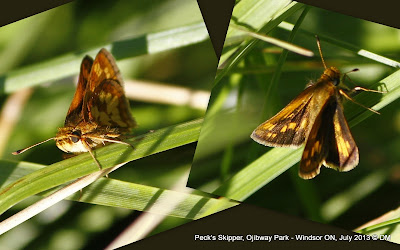