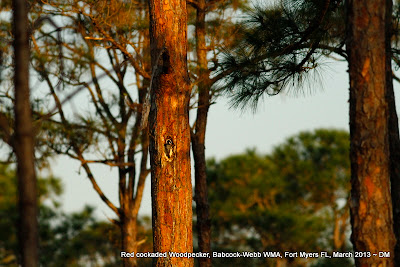 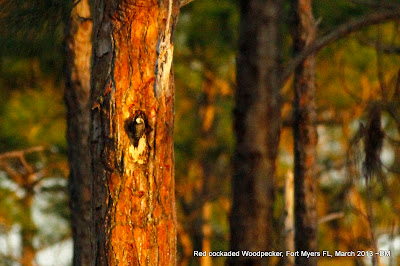 This second posting on my recent Florida Vacation birding highlights covers some of my newest lifers. One of the best birds I was able to observe was a single (endangered) Red cockaded Woodpecker (RCW) at the 80,000 acre Babcock Webb WMA [link][map]. Admittedly, there are two areas/colonies that biologists have placed artificial nestholes into the sides of large Long-key Pine trees to help these woodpeckers have easy/ideal nesting habitat.  Red cockaded Woodpeckers are endangered because their habitat is endangered. Large mature pine tree habitat, with prescibed burning-induced clearings to improve biodiversity. 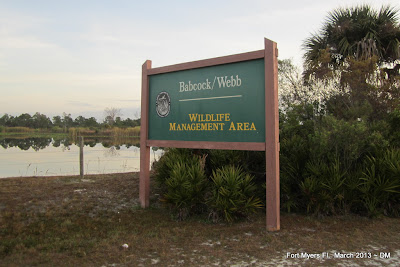 On my third visit to the Babcock Webb WMA (my first visit was in March 2011), I had arrived at sunrise. While driving down the north end of Oilwell Grade road, I had seen a large raptor cross the road ahead of me. I stopped for a moment to see a Great-horned Owl perched on a pine limb. No RCW was found at the first RCW area, so myself and another pair of birders decided to join forces and move on to the other RCW area, which was on another road called Tram Grade road. Enroute to the second area, the other car took a wrong turn, so I stopped at the intersection of the two roads mentioned above and scanned three trees with white rings painted around their base to indicated that they have RCW nests. One of those three trees had a medium sized woodpecker with barring along its back and huge white cheek patches... RCW!!!

Perhaps the quick cellphone video I took in one of the other birder's scopes shows the woodpecker better than my photo. The video is not that great, as the other two ladies can be heard talking and taking photos. We were about 40 meters away from the bird and remained on the roadway while observing the bird. The bird flew eastward moments later and was not seen again.


Another highlight of my Southwest Florida birding was a morning walk at Corkscrew Swamp Sanctuary [http://corkscrew.audubon.org/]. This pristine 13,000 acre Audubon preserve is a breathtaking walk through several habitats, including the "largest remaining virgin bald cypress forest in the world (approximately 700 acres)" ... some of the trees had signs indicating they were over 400 years old!

Two lifer species for me were the Yellow-crowned Night Heron and the Barred Owl. I found the YCNH to be a difficult bird to find for some reason. I don't think I would have found it without the help of a naturalist that was walking around. Luckily, it was dry season and only two small lakes remained, concentrating most of the birds to two smaller areas. 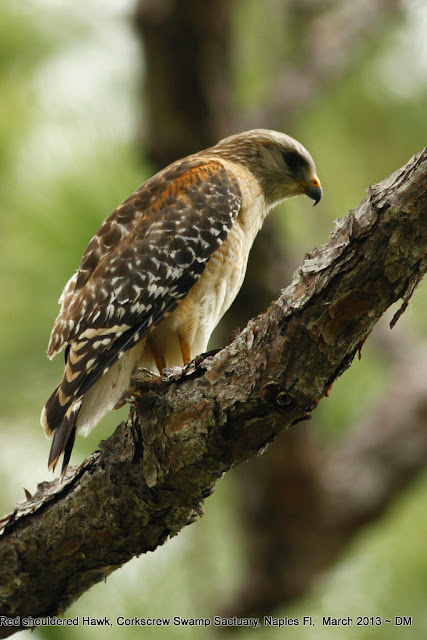 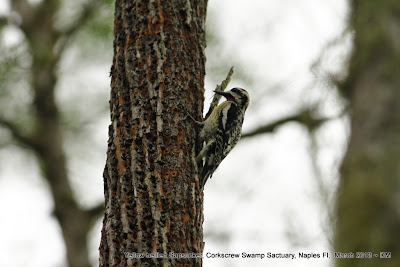 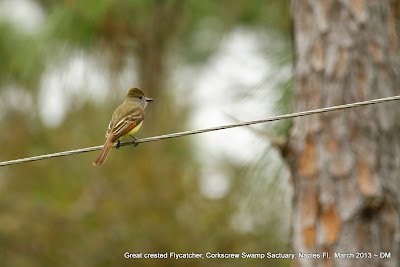 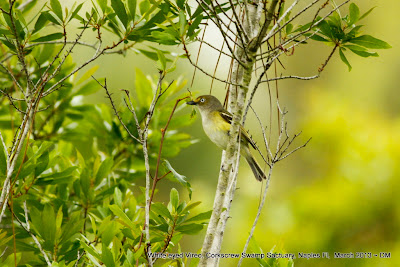 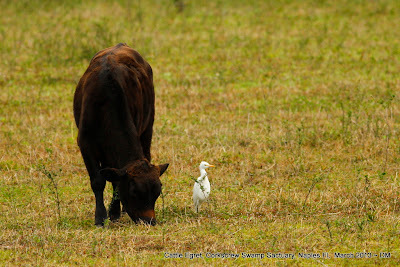 I found this bird while driving on a pretty major highway.  Pileated Woodpeckers were seen at  at Lover Key Park Beach, Corkscrew Swamp Sanctuary and this one while driving to Lehigh Acres.

This female Least Bittern was seen a Lakes Park, a nice municipal park in Fort Myers. I watched this bird forage for a while. At one point, I caught a minow and just held it in its beak for a minute before eating it. A Common Moorehen and Green Heron, as well as many Boat tailed Grackels were around. At one point, a Grackel started gesturing and pecking towards the Bittern. The Bittern pecked back and held its ground, but ... it just bugged me that the Grackel was being so aggressive towards it. Kinda felt bad, but both parties went back to foraging. It was incredible to watch this forage from 10 feet away. Not a lifer but still an amazing bird!

This is just a quick look at the five life-butterflies that I saw on my recent trip to Fort Myers. The five new species seen were:

I actually dipped on my one target species, which was a Mangrove Skipper [link] that is 'common' at Lovers Key State Park, which is basically hundreds of acres of Red Mangrove, the target butterfly's host plant. I visited the park but saw three other species but not my target species. After I left the park, I noticed in the park guide that there was a butterfly garden pathway that may have hosted my target butterfly... I need to read the manual (rtfm) once in a while.

I saw a few other butterflies on the trip which included: Common Buckeye, Red Admiral, Dainty Sulphur and a small dark Monarch (I should have taken a better look at it,  perhaps a Queen Butterfly).

Pretty soon, we'll see some early butterflies, such as Mourning Cloak, Eastern Comma, and Spring Azure will be flying through the forests and natural areas of Southwestern Ontario. 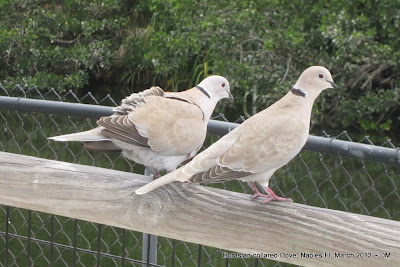 Posted by dwaynejava at 10:01 PM No comments: 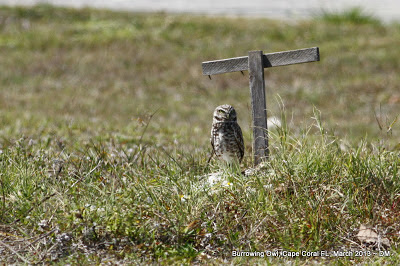 I just got back from one week in beautiful Florida. My trip was not mainly a birding trip, as it was more of a family trip, but I still did get in a fair amount of birding. To get some birding in without disrupting the family too much,  I would wake up before sunrise on several morning and drive out to to places like Babcock Web WMA  or Little Estero Lagoon and be back at the hotel for 9am. This posting only covers my last day in Florida... it was that good!

During our Florida trip, we had a hotel more 'inland' but I had booked one night right on Fort Myers Beach. I chose the famous "Holiday Inn" [map] with the nature preserve behind it. I had attempted to bird this area once or twice in the past, but found it birdless (or just the most obvious birds) and did not understand what the big deal was. A birder told me that I need to go in the morning, and to check out the second small lake, more to the southwest of the hotel. This second lake was a little better! I had about 7 plovers, one was a black-bellied, the 1 was a Piping Plover (unbanded) and the other 5 were Semi-palmated Plovers (I think). Most readers of this blog already know that the Piping Plover is endangered due to its habitat requirements --- Wide sandy beaches. This gorgeous little shorebird simply makes a small cup in the sand (a scrape) and lays sand-coloured eggs right in the middle of the beach. If people are walking on the beach, driving on a beach (think Sauble Beach or Daytona Beach), dogs, cats, gulls, snakes, crows, racoons etc... any of these natural or mademade interruptions... the nest fails and the population plummets towards extinction. Luckily we see some attempt to have areas of beaches flagged off for piping plover nests.
I took note of the area, and scanned for anything I could see. Several White Ibis, Tricoloured Heron, Belted Kingfisher, Least Sandpipers, Black-crowned night Heron, Osprey, Brown Pelicans, Laughing Gulls, Great Blue Heron, Great Egrets.

Then, as I was walking back to my hotel room, I saw two photographers with tripods walking briskly towards the beach. I was not expecting to see this next bird, which was huge (literally and figuratively)... An American Oystercatcher, just strolling slowly along the beach, completely ignoring the morning joggers and shell-collectors! 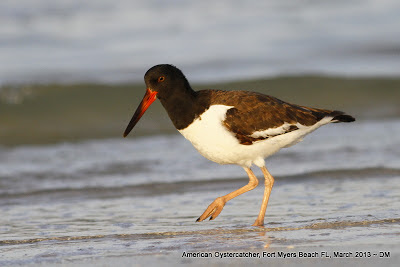 This was my last day in Florida, and we needed to catch a plane at 2pm, so later on, at lunch, I had asked our waitress (who was from Cape Coral) if she knew of the famous Burrowing Owls of Cape Coral Florida. She suggested a park (Jaycee Park) in Cape Coral that was not far off our path to the airport. Nobody at this park new of any Burrowing Owls... I must have asked 5 locals and hardly anyone knew of them or their locations. One lady said to look in vacant lots and look for PVC pipes sticking out of the ground.

Out of time, I had to drive back to the airport. I was not going to see these owls on this trip. I was explaining to my wife about "Thats how  birding goes... You try your best but sometimes you're not going to find what you're looking for"... Just then I see a vacant lot  with PVC markers...Pulled over, binoculars... Bamm! Burrowing Owls!!! 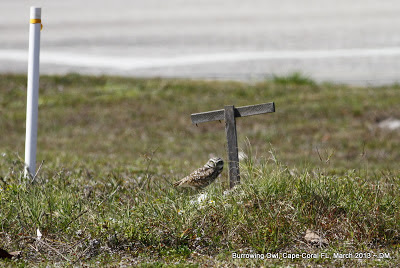 Here is a street-level map of where I found these owls!


Finally, as we arrived at the airport (on Terminal Access Road), two Swallow-tailed Kites flew right above my car. I pulled over on the shoulder and snapped a few photos. Perhaps these two are setting up a nest near the airport? This Kite has nesting materials! 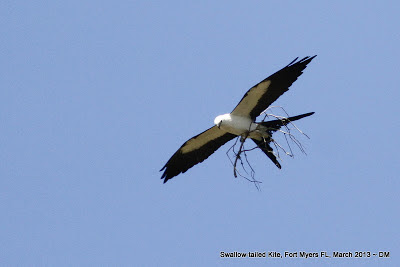 This was just the last day of my trip, I will try to pack in the remainder of the week in my next posting!

PS: Here is a list of target birds I had for this trip (ambitious list!). I had  a humble 7 life birds and 5 or so life butterflies on this trip. 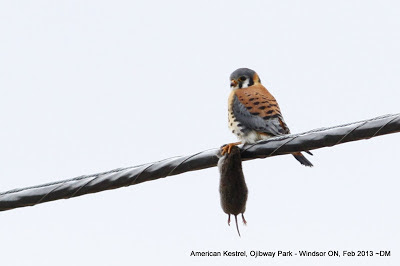 Just a mini-posting for this week. Not much going on this week bird-wise in Windsor. Some White-fronted Geese are still at Hillman Marsh... I want to go see them, but just don't have the time resources at present.

I'm in absolute awe of the birds in the Toronto/Hamilton area. A Western Grebe, Harlequin Duck and Snowy Owl are visible at one park along Lake Ontario. Can you sense my jealousy??? I want to twitch these, but I just can't afford the 8-hour round trip car drive. :-(   Another excellent blogger from Ottawa was blogging about the wonderful birds up there such as Pine Grosebeaks, Black backed Woodpeckers, and Bohemian Waxwings, again, I want to twitch these but can't afford the 18 hour round-trip car ride. :-( 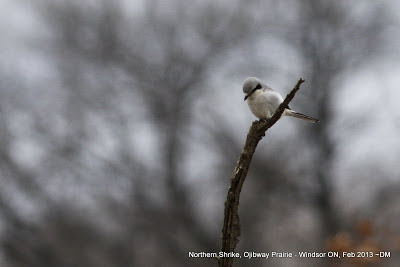 A little closer to home, a local Northern Shrike is still doing the rounds in the Ojibway Prairie. Jeremy Bensette and myself were birding recently and scoped this bird from the Titcombe turnaround circle off Matchette. This Northern Shrike was 200m away, and Jeremy noted that it was probably only 20m from the road off Matchette. Incredibly, Matchette Road is closed at EC Row, (the road has no traffic), so I just drove up along Matchette and pulled over. The car made an excellent blind, and we just watched the bird at very close range.  This was my absolute best look at a Northern Shrike ever, and it was extra cool because it was oblivious to my presence, in fact, I drove away from it after watching it jump from treetop to treetop to fallen snag branch (see below). Generally, if I see this bird on foot, and it is very skittish, keeping a 100m distance. 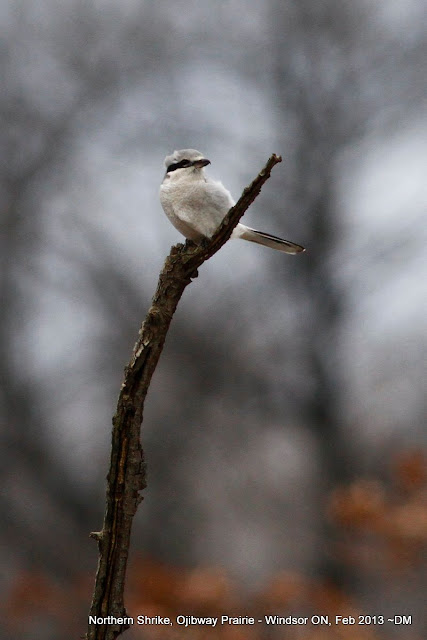 Moments later, just 400m down the road, we saw an American Kestrel with a huge mouse (or vole). It struggled to take flight with such a large dinner in its talons. Its good to see these birds are eating well in Windsor!


Good birding,
Dwaynejava
Posted by dwaynejava at 9:37 PM No comments: