A recent Ontbirds report from a LaSalle area birder mentioned a Great Egret in Turkey Creek near the Front Rd Bridge. This birder also mentioned a Catbird, Kingfisher and Mockingbird in the area as well. So, having some extra time,  I tried this afternoon to go see this bird for myself. I missed the Egret from the reported spot, so I figured I would drive up to River Canard, even if no birds were around, its a really beautiful drive. Long story short,  the Great Egret was seen, along with two Great Blue Herons just off to the west from the bridge that crosses over River Canard.

Also seen was an Adult Bald Eagle on its nest on Fighting Island in the Detroit River. This is visible from the LaSalle Park at the foot of Laurier Dr and Front Rd.


The Cost of Birding
With gasoline selling at 1.22/L, I realized recently that even with a fuel efficient car, gas costs about $0.10 per KM! To drive from Windsor to Point Pelee and back would cost about $10! I don't know if I'm being cheap here, but 10$ for a drive to PPNP seems pretty steep. I guess I never tried to break down the cost until recently. Rondeau on the other hand would be about $15 in gas (round trip) plus $17 to enter the park. So, if I go to Rondeau Park in May, I am basically coughing up $32.... Seriously? That is major money!!! Is there any other county (Essex, Kent & Lambton Counties) in North America that has 3%** original forest cover due to agriculture, then charges people to walk around in whats left of the rare forest habitat?

Life List Wishlist
As I approach my 3rd year of birding, I think I will put less emphasis on my life list which I think is a natural progression for birders. But, I am presently sitting at about 290 species of birds, and I think it would be really fun to count the next ten as I approach 300 species. Even though its an arbitrary number, I think some celebration is in order.

To see any of the above species, I think I'm going to really have to study the stats and range maps from Ebird.ca. Many of the others may require some travel over the summer. Others may need outright chasing. It will be interesting!


**3% is a statistic but I don't really have a source, it may have been at the PPNP VC, Ojibway Park or informal conversation with other nature lovers. Here is a map, compliments of ERCA that shows the tiny amount of woodland that remains in Essex county. Take out your magnifying glass!

False Eye Spots in Northern Pygmy Owl and Others...

One nice winter treat birders and nature enthusiasts get to enjoy (if they are lucky) is the beauty and mystery of owls. Kevin Norris recently proposed an eloquent explanation for the Great Grey Owl that was in Kingsville earlier this year. He told an interviewer from the Toronto Star:  "the owl arrived to share a sort of metaphysical gift from Mother Nature" (Tapper). Well said Kevin!

On that note, I am following a great nature photographer named Tania Simpson through Flickr. A recent photo that she posted of a Northern Pygmy Owl (photographed in the Okanagan Valley of British Columbia) just blew me away. She graciously granted me permission to use her images on my blog.  The owl in itself is a breathtaking photo, but the false eye marks on the back of the Pygmy Owl's head somehow really took me aback (see 2nd photo above). Feel free to check out her flickr account at this link: Flickr: Through Tania's Eyes'.

One interesting thing about false eye marks is: Does the bird even know it has those marks on the back of its head? It may not even know, considering owls would never see themselves in a two directional mirror. The only testament these owls have to their false eye marks is their own chance occurrence of surviving in the wild after millions of preditor-prey interactions. This mark that they are probably unaware of has worked its way from being a chance marking to being part of of the phenotypical expression of its DNA!


This is a photo of an American Kestrel that is showing its false eye/beak plumage on the back of its head is a less stunning example of this phenomenon.This photo was taken in Jan 2012 near Point Pelee. 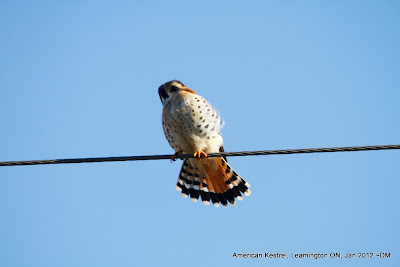 David Sibley (Sibley) has blogged about false eye marks on several occasions and even blogged about an owl photo I had taken. He agrees that there seems to be obvious eye marks on this Eastern Screech Owl, even though there is not much literature that I could find on the web or in my field guides making mention to it. These plumage marks are on the front of the owl, protecting it while it is sleeping during the day. Spending most of its sleeping time in a tree hole, its eye marks are in front! Note the dark eye marks below its real, closed eyes.


Flickr user Bernie Monette has a Screech Owl photo that has these similar markings as shown at this link. After taking a second look, those marks show up 2" below its eyes, closer to its breast. Let me know if you find any other Eastern Screech Owls with such marks! 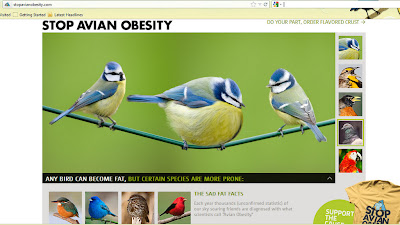 Well, tonight I wrote a mid-term exam for a course I'm taking right now, and I did quite well!  Last Thursday, I had a major assignment that had 56 questions over 16 pages, so I had no time to post over the last three weeks. A young university student asked me on Tuesday of the assignment due Thursday: "Did you start the assignment yet?"... Start it? I finished it last weekend. I can breath easy for a few weeks right now until the end of the course arrives, and I will be back into 'hiatus mode'.

Stop Avian Obesity?
A recent advertisement from a Detroit area pizza company featured a tag line: "Stop Avian Obesity!". There is a website http://stopavianobesity.com/ along with a youtube video below. The premise is that people throw pizza crust away because it's bland, and birds are now eating it. This pizza vendor offers flavored crust, diverting crust from landfills, saving birds from becoming overweight. I must warn you, it is silly, potentially offensive, well... just downright ridiculous. But I share it anyway because it is birdy:


If you go to the site, you can buy a t-shirt for 14.99. Also, they have an Indigo Bunting which they labeled as a "bluebird". I guess they didn't hire a ornithological consultant for this piece. I don't think one would have patronized this campaign. Will this add go viral? I think not. 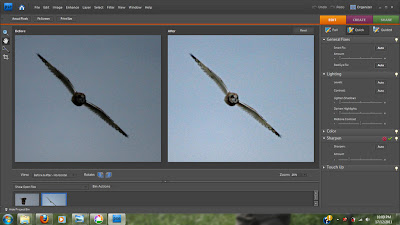 I don't really use photoshop. Only on the rarest of occasions, have I "increased brightness in shadows" as you can see above in this in-flight photo of a Short eared Owl. Note the before and after results of this nice tool. My problem is that my computers are too slow and I don't really have time to do post-processing! Nor, am I very good at it. :^)

Brighten in Picasa:
I photographed this Mountain Bluebird near Shetland recently in very challenging lighting conditions. Its not a great photo, but considering it was (dim & cloudy) early morning, with some blowing snow and backlit, its not a bad photo. I had to increase exposure on my Canon 7D about 1-3 stops because the snowy background would have darkened the photo (to leave some detail in the snow)  and underexposing the bird. Even with this in-camera adjustments, some brightening took place in Picasa. I've tried to keep the photo as 'honest' as I could but possibly some colour bleeding or distortion may have occured. BTW... This photo was from about 35m away, through a roadside wire-fence and taken handheld from inside my car. It is also heavily cropped! 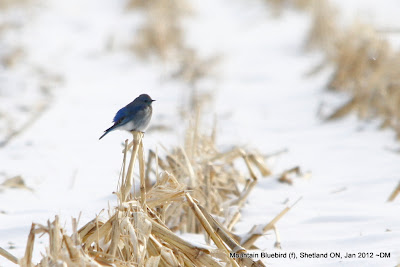 On Jan 7th, 2010, I lifered my first Eastern Bluebird at Ojibway Park. The lighting conditions were horrendous, and the image below, while diagnostic is terrible. But, without increasing saturation and brightness, this bird would have looked like a European Starling (well, not considering the difference in silhouette ... but you know what I mean). 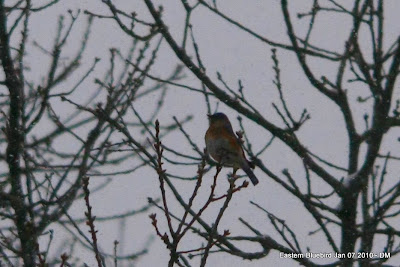 Good birding, its good to be back!
Dwaynejava
Posted by dwaynejava at 9:38 PM 4 comments: