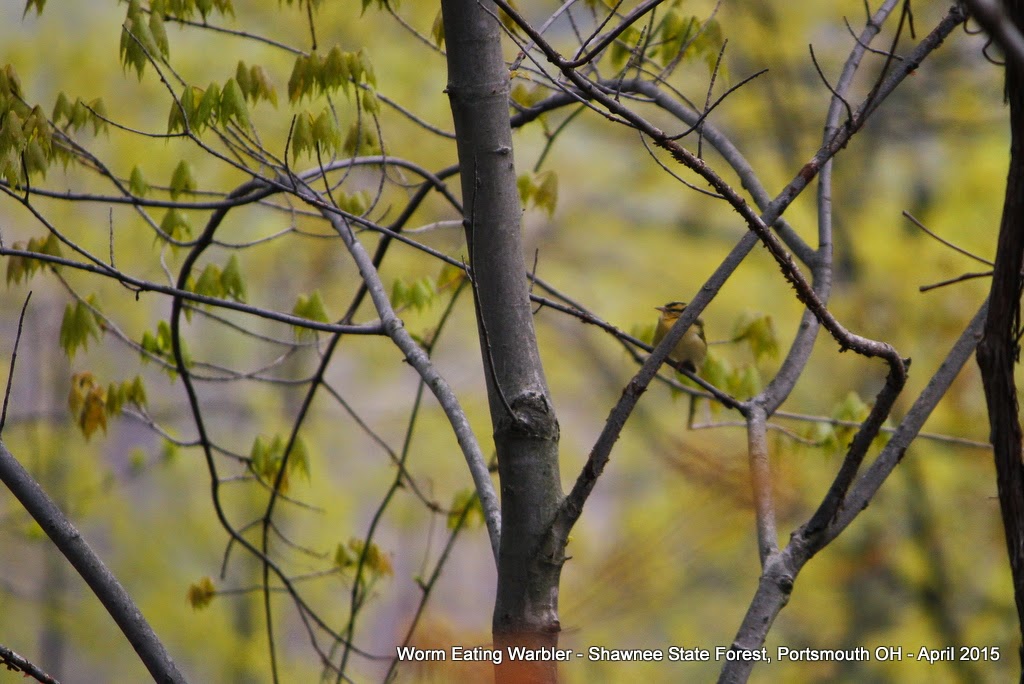 Last weekend, I was lucky enough to join the Ohio Ornithological Society's Spring Conference and bird the Shawnee State Forest. The weather was a little bit cold and damp, but the birding was pretty good. Some warblers seen last weekend included:

At one point, our group spotted a Louisiana Waterthush, but I was facing the opposite direction, I was trying to lock focus on a nearby *Carolina Chickadee! 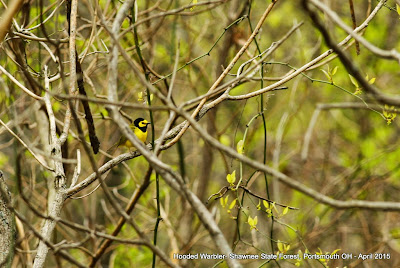 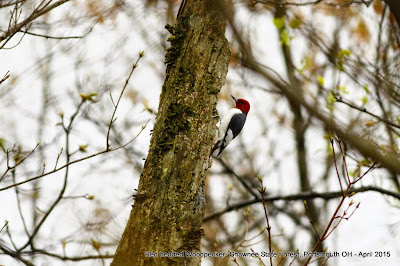 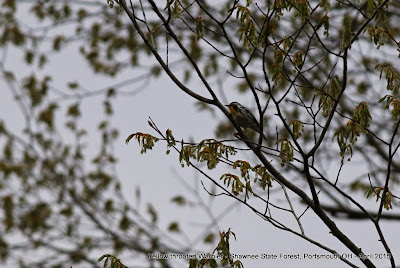 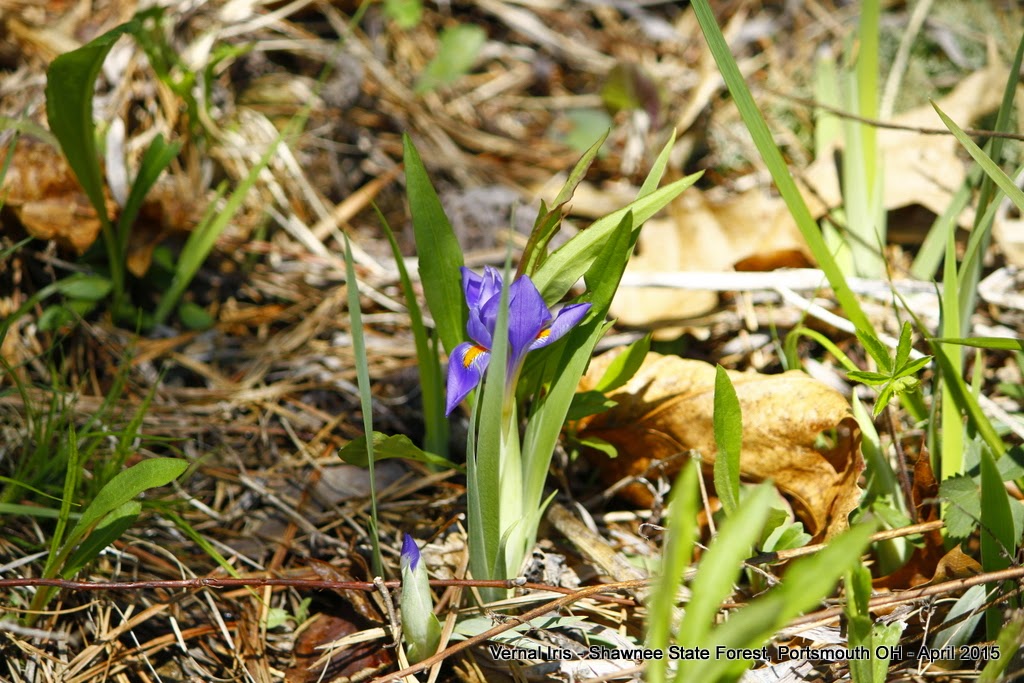 I really wanted to see more butterflies on this weekend, but it was cold and rainy on Saturday, and only warmed up on Sunday later in the afternoon. I did get a chance to see a Horaces' Duskywing and a Zebra Swallowtail. I probably could have seen several more species if it had been a bit warmer.

On a more local note, I birded Malden Park in West Windsor after work and was happy to see my first decent group of Warblers. 6 Yellow Rumped, 2 Palm Warblers and a couple of Blue grey Gnatcatchers.

I signed my 5-year old son up for a soccer camp at Oakwood Community Center here in Windsor, and it dawned on me as I arrived that there is a decent little forest - which is part of the Ojibway Complex behind the building. The soccer coach instructed us parents to "leave for the hour" so I figured ... Why not check out the forest? One of my target species for this walk was a Carolina Wren, which I'm pretty sure should be common in this little forest. 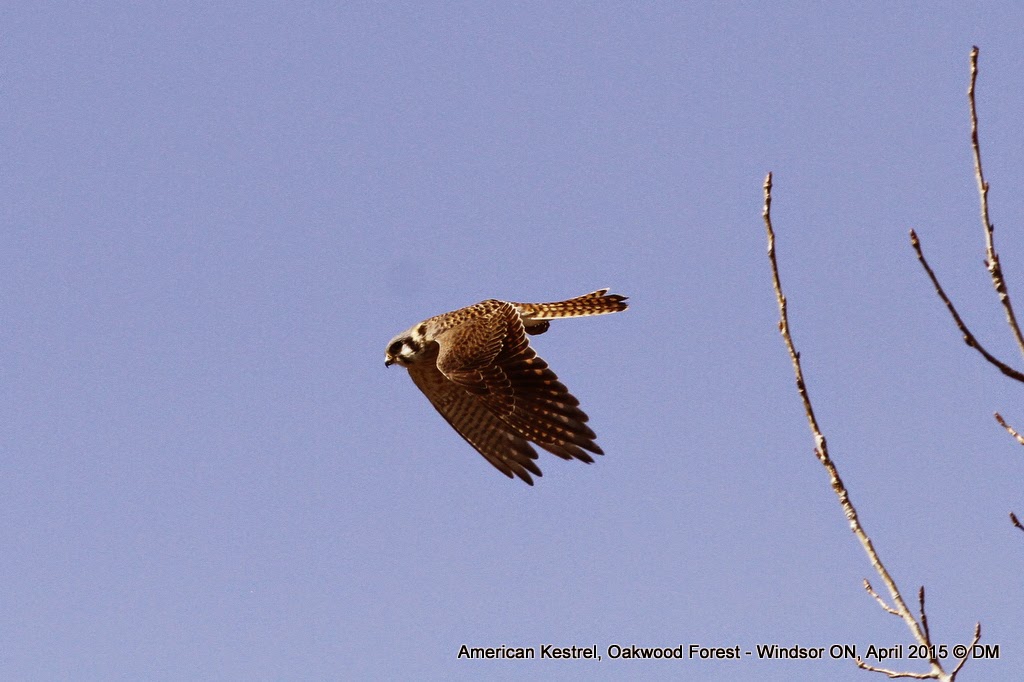 As I walked through the parking lot to the adjacent forest, I was pleasantly surprised to see an American Kestrel perch in a nearby tree.  Just as I walked into the forest a little, I noted a small grove of Poplars (or Aspens???) which have historically hosted Yellow bellied Sapsucker at this time of year. Sure enough, I believe two males were foraging in the area and I got some great looks at them in the afternoon sunlight. Its a great pleasure to see these birds in migration... or on their breeding territory at Carden or Algonquin. 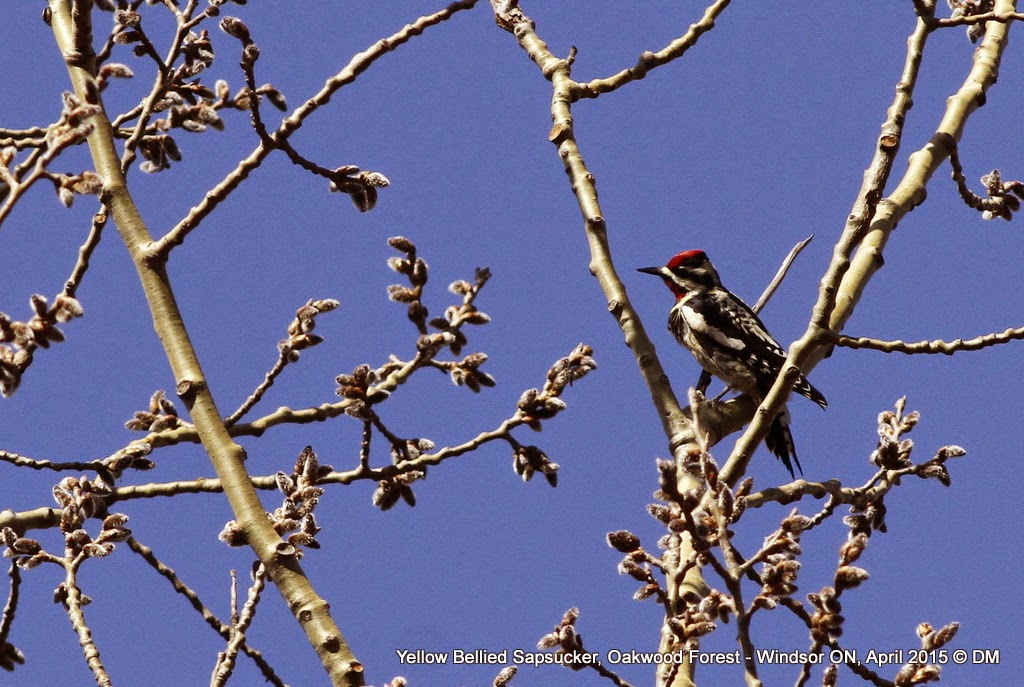 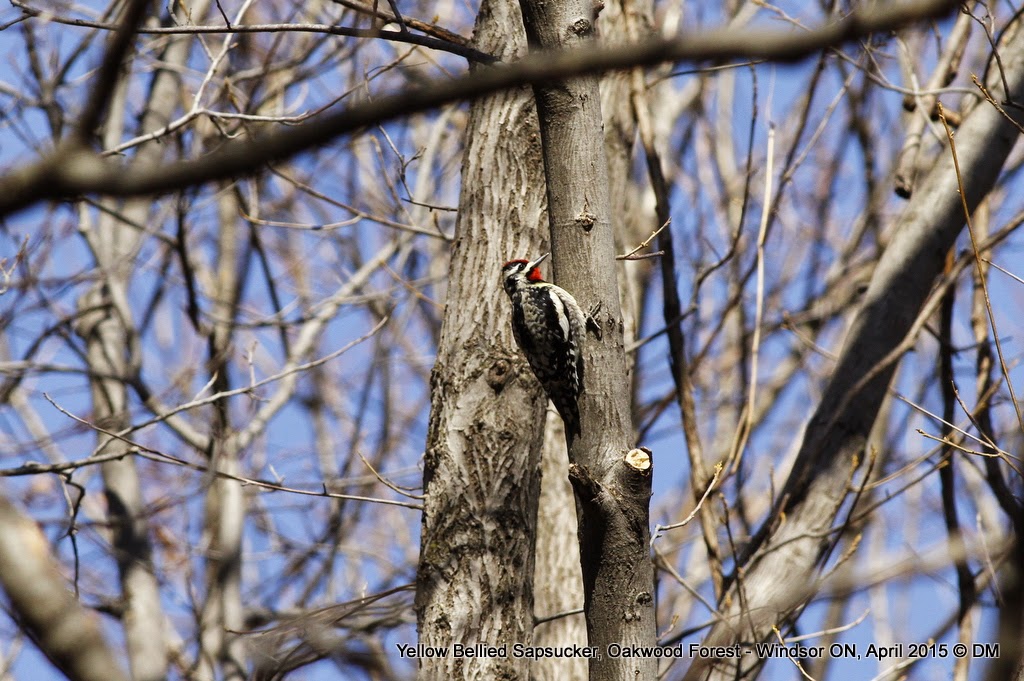 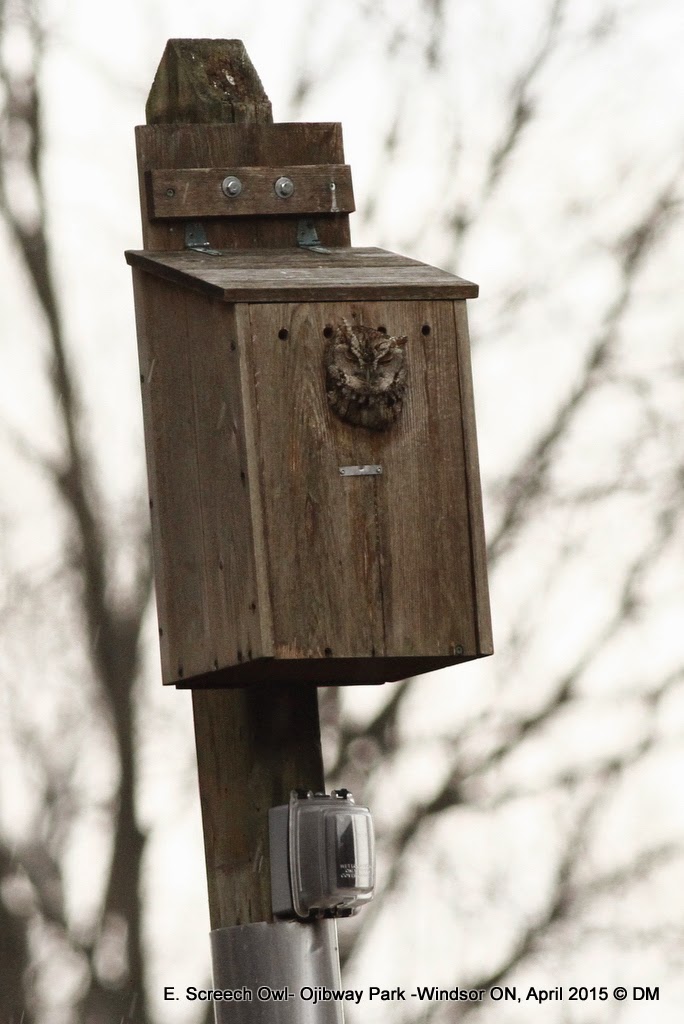 A family walk at Ojibway had a nice view of an Eastern Screech Owl in a nest box. Do you find anything weird about this nest box? Its about 12 feet up in the air... but it seems to have a weather-proof electrical outlet attached to it. What could it be for??? Do owls want to charge their smartphones during their daytime naps? Owls these days are so spoiled.

I'm thinking of attending a birding event at Shawnee State Forest in Southern Ohio (Ohio Ornithological Society Spring Conference) during the last weekend of April.  Some birds that are pretty common there include: Ruffed Grouse, Kentucky Warbler, Worm-eating Warbler, Carolina Chickadee - which would all be lifers [Ebird Chart for Shawnee State Forest]. I've never seen a female Cerulean Warbler and that would be an awesome bird to see for me as well. There are 20+ butterfly species in late April there as well (many of which would be lifers as well).  I'll see if I can get permission to go... ;-p  ... 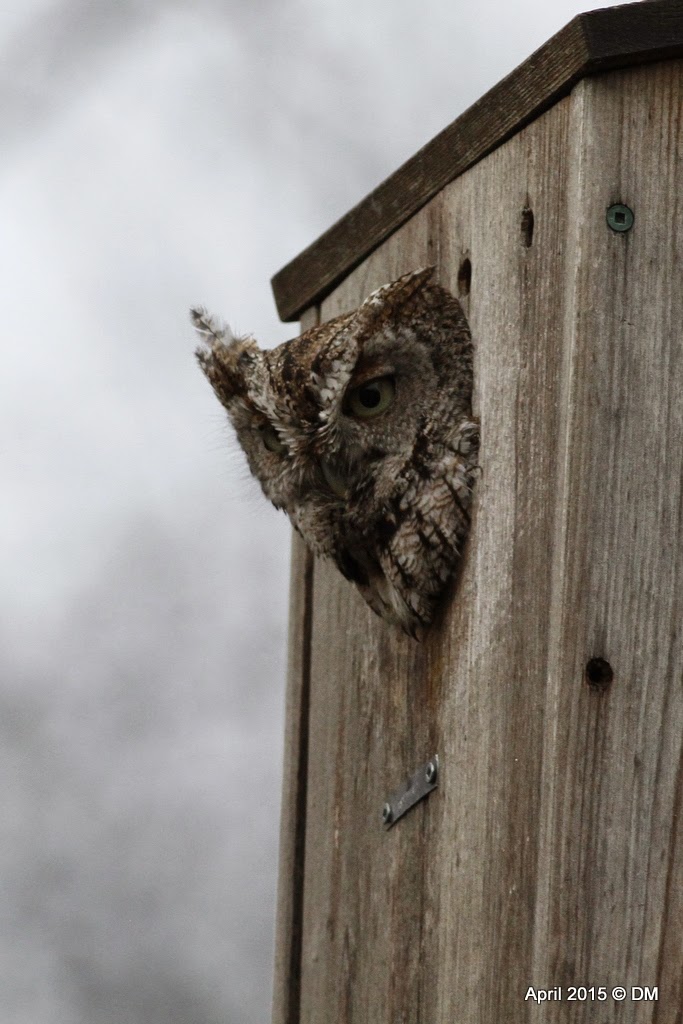 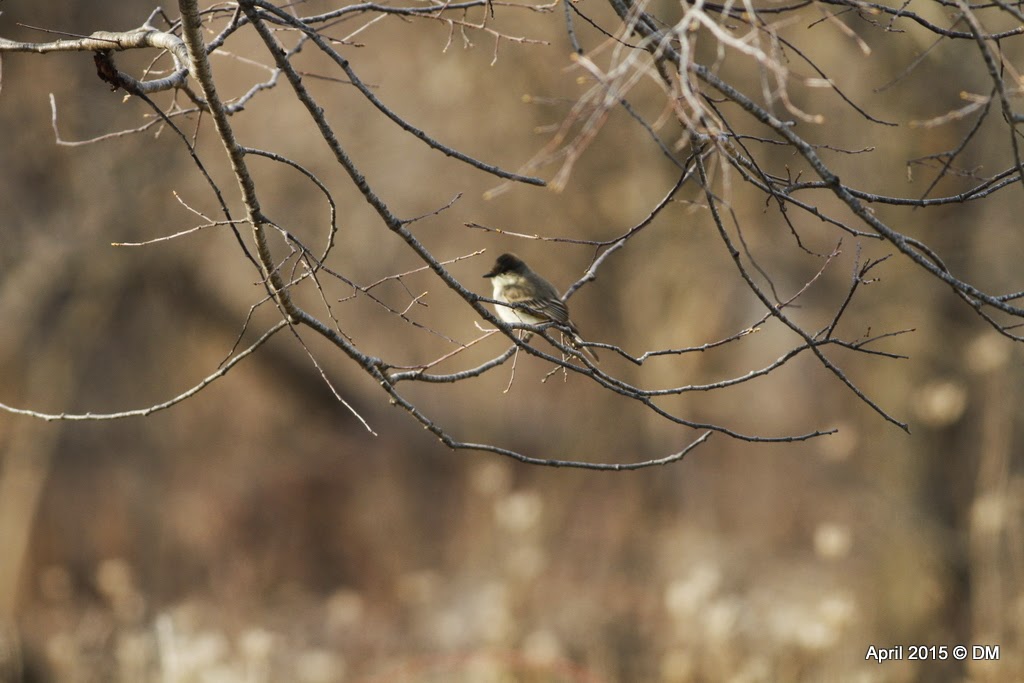 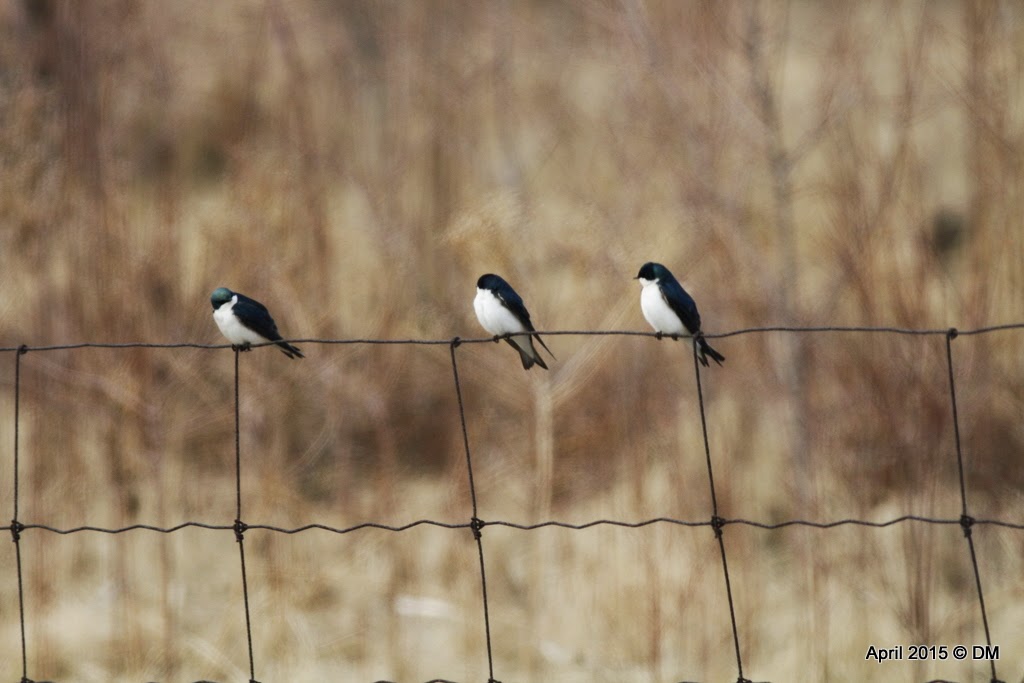 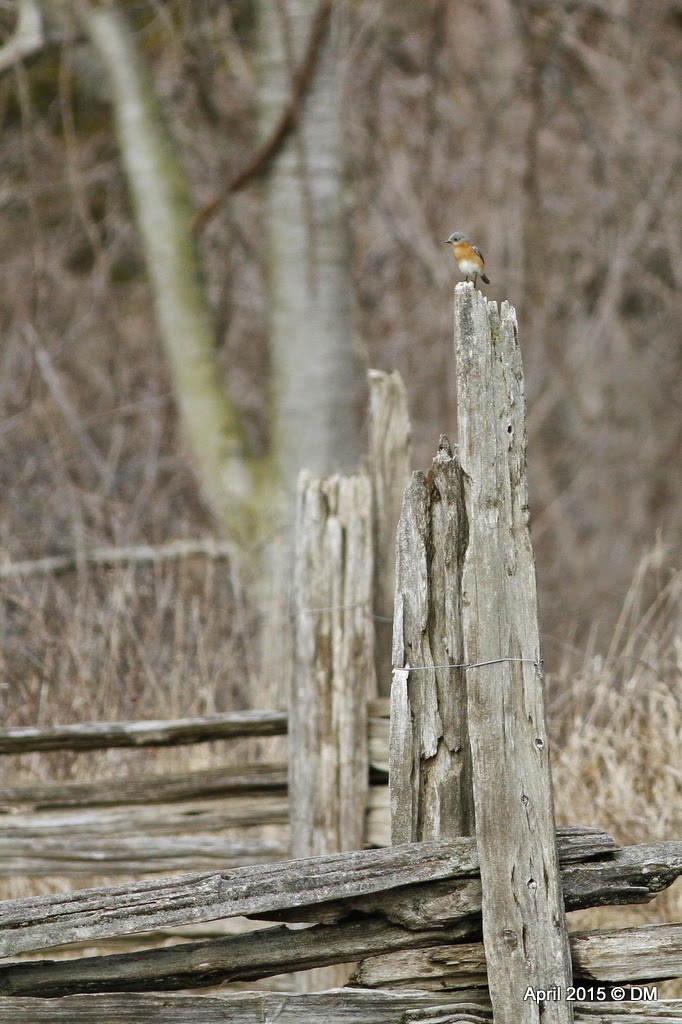 Would You Fight For a Tree?

All this talk of great trees lately made me think of a story that took place two or three years ago here in Windsor. The story goes that a tree trimming truck showed up to a lot to cut down a giant, majestic Sycamore (pictured above on the left) near Roseland Golf Course in South Windsor.

Neighbors quickly noticed, and a confrontation took place between the tree cutters with chainsaws and the neighbors. One of the workers supposedly got his foot run over by a man in a car, and the driver may have gotten in some trouble for doing that... But, the tree still stands today.

Another hero is made known in this story. A local entrepreneur brokered a deal between the landowner and the city to not cut the tree down. I'm not sure if the details were published but I think its a pretty amazing story. Who among us would physically confront men with chainsaws? I think all involved with this story are great people. The neighbors that stood up for the tree, the workers who stepped back after being confronted, the landowner for keeping the tree even though he could make more money by severing his lot and selling it on the real estate market. A local entrepreneur deserves thanks as well for helping to find an ongoing solution to the problem.


It was an absolutely gorgeous day today in Windsor and with recent reports of some new migrants showing up, I couldn't help but go for a walk at Black Oak Heritage Park & Ojibway Park's Tallgrass Prairie in Windsor. It was exciting to see an Eastern Phoebe along with lots of Mourning Cloak and Eastern Comma Butterflies - All first of season! At Ojibway Park, I also heard Western Chorus Frogs and walked through some habitat that is good for viewing American Woodcocks. I enjoyed listening to Song Sparrows calling this afternoon as well. 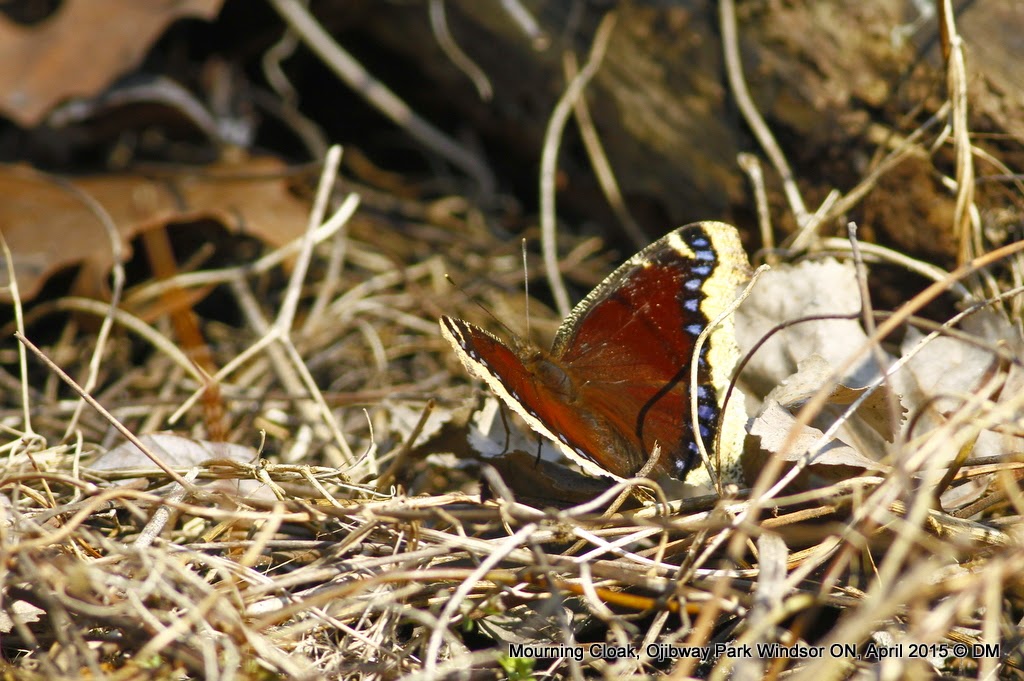 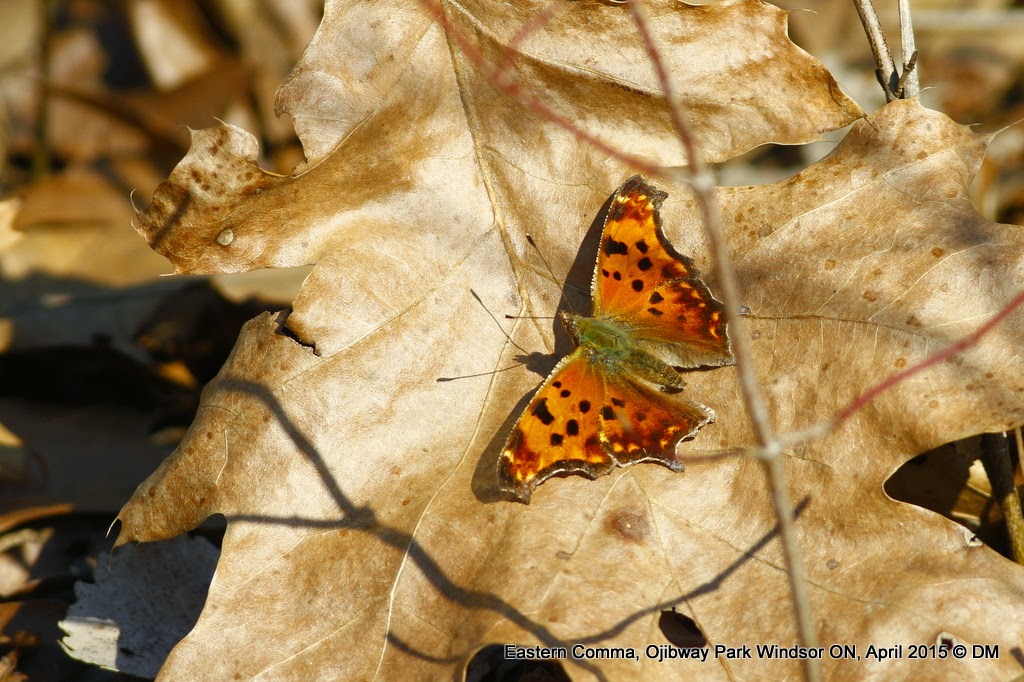 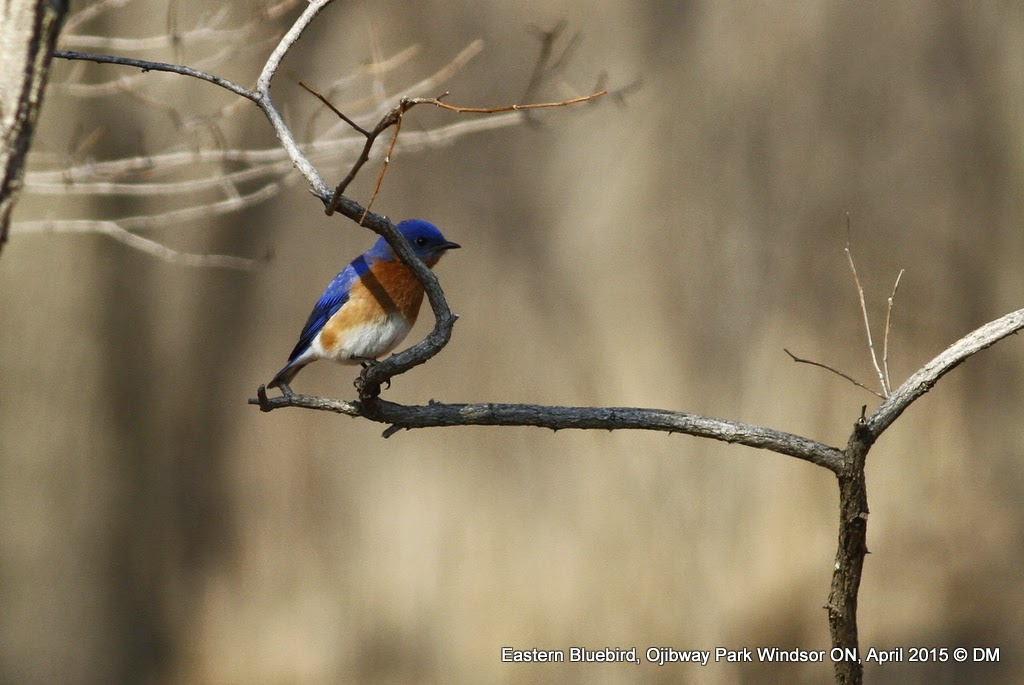 At one point, I noticed a nice male Eastern Bluebird foraging in the dead leaves at Ojibway and was treat with some great views of this beautiful bird in some nice afternoon sunlight. A female was nearby as well. 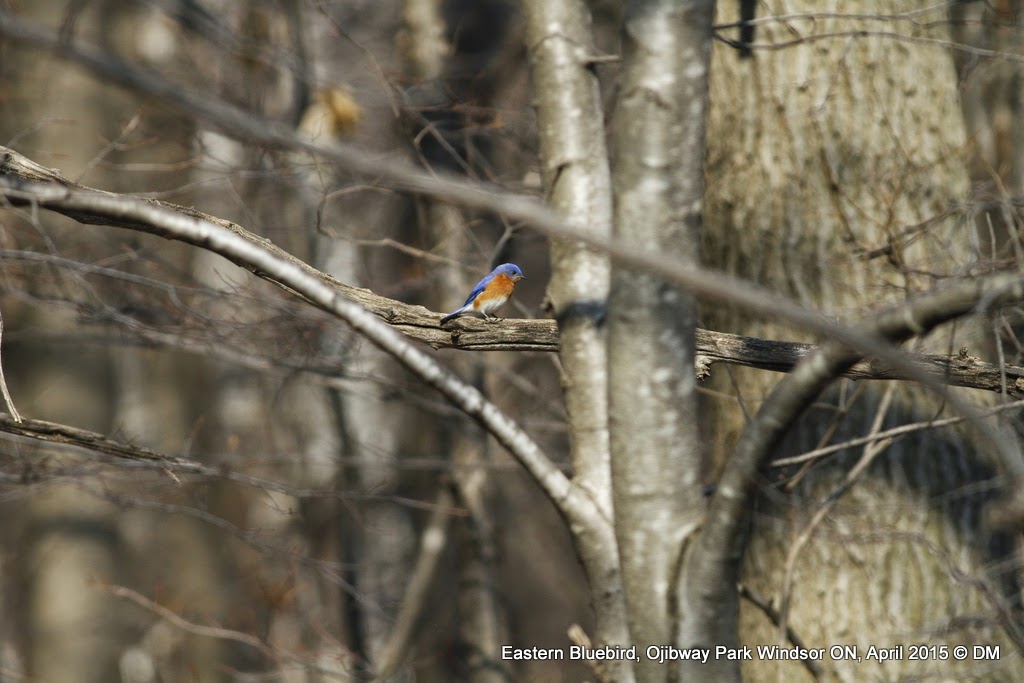 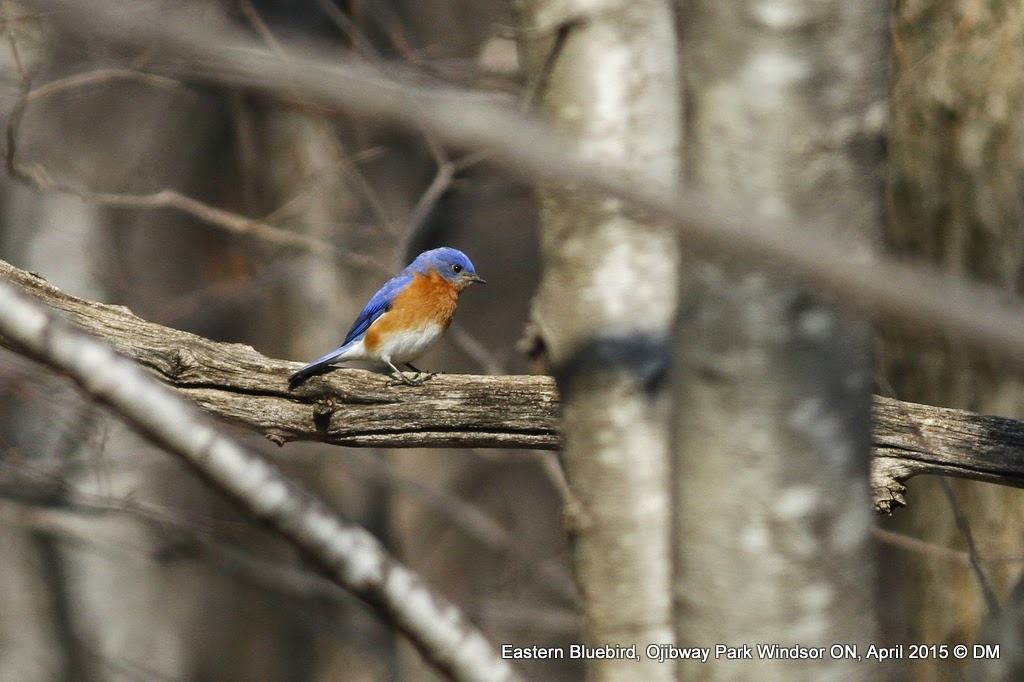 I was also able to hear the call of the Western Chorus Frog this afternoon. Its hard to see them but last year at about this time, I was able to take some video footage of them singing at Ojibway Park. See video below and turn on your speakers!


Carolina Wren Query -
I've once heard that Carolina Wrens are found mainly in the SE US, but their northern range dips up into SW Ontario which is a Carolinian Deciduous Zone. I've heard that their populations increase in years where we have mild winters, then after harsh winters, their populations are cut back as they can't tolerate extremely cold winters. These temperature restrictions on birds are called "isotherms" if I'm not mistaken - The average temperature over a winter season in which a bird species can tolerate and survive in. If you look up Carolina Wren under Ebirds' Species Maps, with "this year" as the date argument and Essex County as the location argument - You can see that a few reports of Carolina Wrens have been made in 2015 --- A good sign that some have survived! 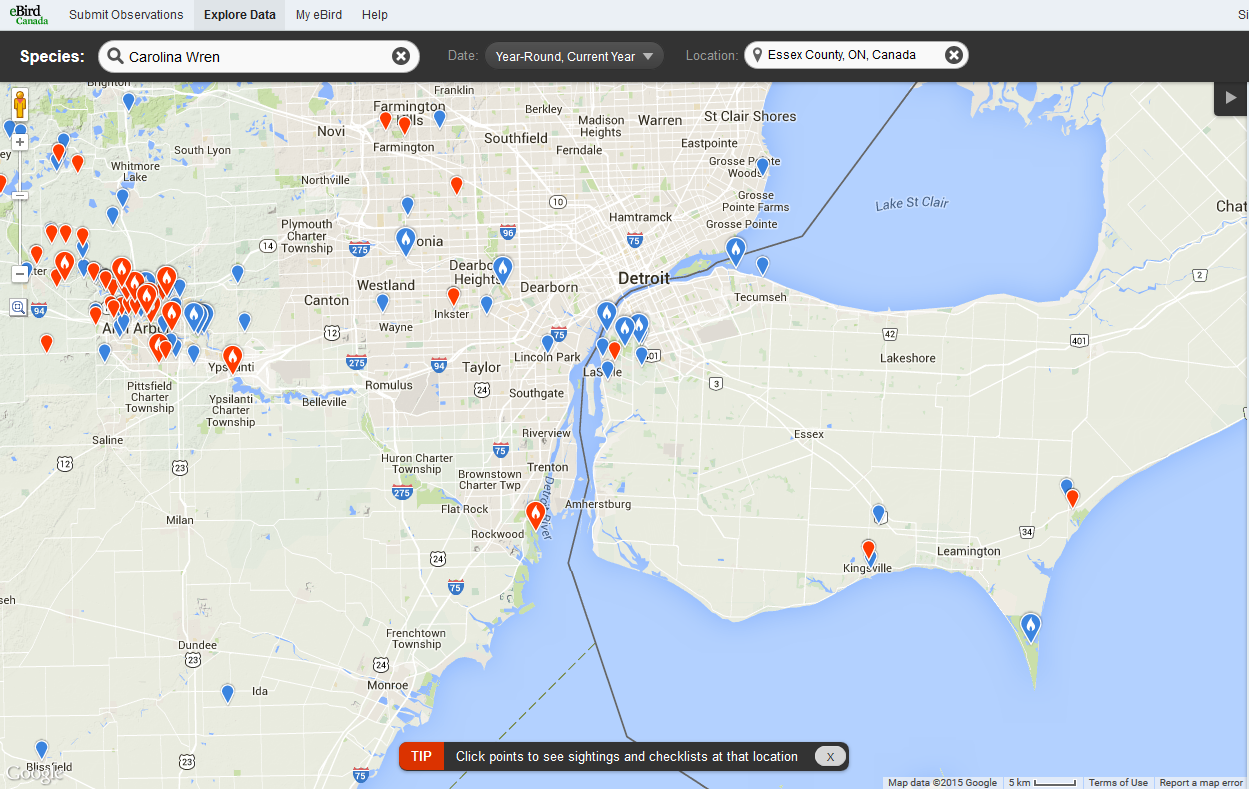 There is a small woodlot in Windsor (very close to where I live) that has recently been in the news. This woodlot and some surround land have been deemed as environmentally significant forest and wetlands. 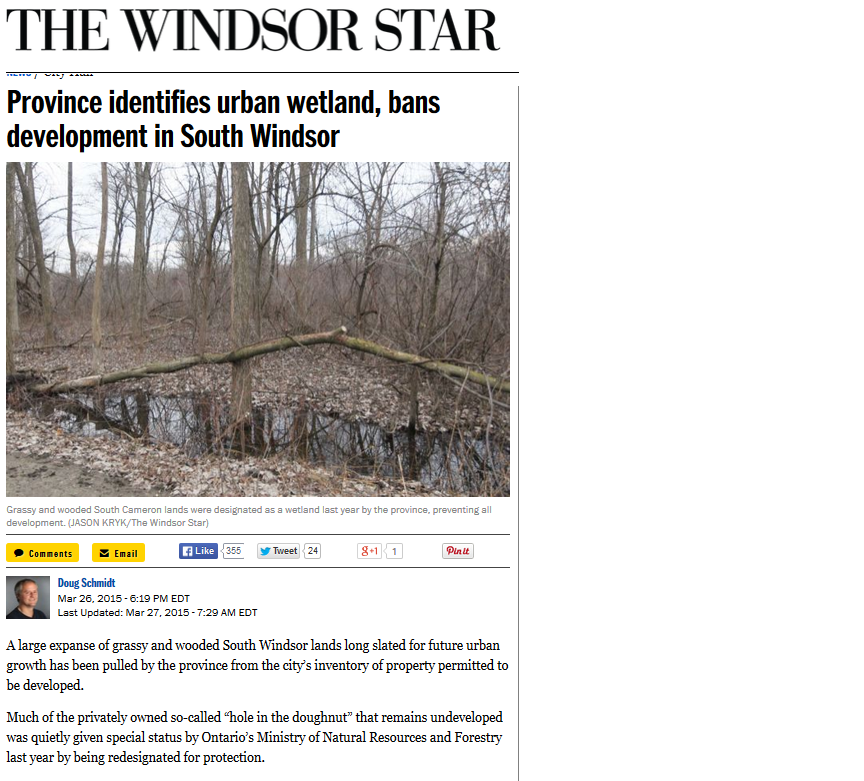 This embedded google map is showing the location of this small urban forest that is surrounded by residential development on all sides and is continually being eroded  --- Acre by Acre. I feel that it is a great thing that the province and city are doing, but at the same time, I think any private landowners that owned land for future development should be fairly compensated for their land. I would imagine undeveloped land in Windsor is worth $80K/Acre.

Click Here to download the PDF. There is an interesting article about Birding Tawas Point in Michigan.... I just might have to go there an check it out this May!   Also, I couldn't help but notice that Windsor's Ojibway Park had a 1/2 page advertisement in this guide (see screenshot below).