I've spent the last two months (April 24-June 24) in transition as I had sold my first house earlier this year, and I've been living at my mother in laws for the last two months --- waiting for my new house to finish being built.  I moved into my new house this week. My new house is nice, it backs up onto a provincially significant forest and wetland in Windsor and the birding from my back yard has been great.  I get to hear Song Sparrows and Indigo Buntings sing all day. I have nesting Rough winged Swallows constantly flying though my back yard. I see Red tailed hawks daily and Coppers Hawk occasionally. Even Chimney Swifts fly overhead with some consistency. 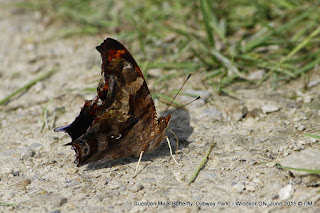 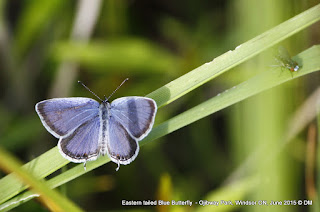 I did the electrical for my new house, so I've been incredibly busy doing that over the last few months but I still make time for birding. Lately, I've made point of butterfly watching around Ojibway Park and today, I took my wife and two boys for a walk at Spring Garden area of Ojibway Park. I quickly noted lots of Little Glassywing butterflies, as well as Banded and Edwards Hairstreaks.

During our walk today though - I noted a warbler singing along the path I was on - It was singing its heart out. I did not even have my binoculars, so I tried to photograph it with my camera and --- was blown away to realize that I was looking at a Hooded Warbler! A Scarlet Tanager was in the same tree - its actually a first for 2015 for me. I managed to even capture video of the Hooded Singing. 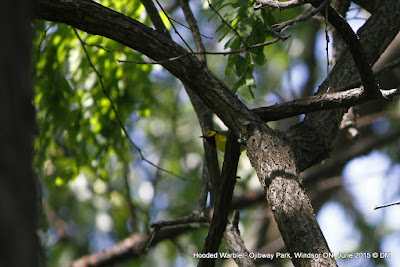 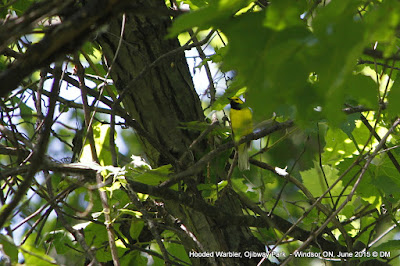 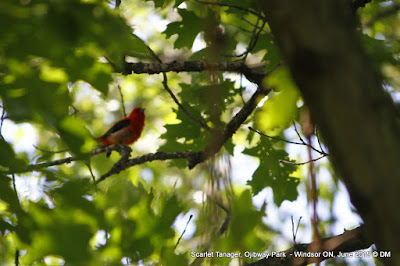 Ojibway Park lists the Hooded Warbler as a non breeding bird that migrates through (see http://www.ojibway.ca/birds.htm) but the time of year - late June - hints that it could be nesting here in Windsor at Ojibway Park. A fantastic bird for Windsor Essex in my opinion.

Dwayne
Posted by dwaynejava at 12:32 AM 2 comments: