Heartbreaking Herbivory of an Endangered Species 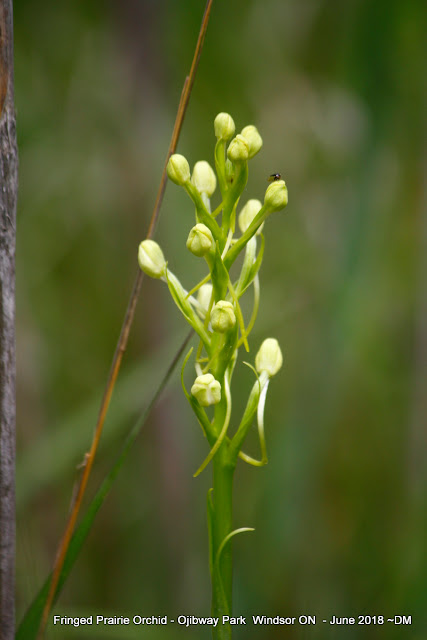 Two weekends ago - I ventured into a tick-ridden tallgrass prairie habitat that I had previously found three flowers of Fringed Prairie Orchid. Last year, I had found them a little past their ideal flowering stage [click here to see last year's posting], and I made a note of returning this year a little earlier to photograph them in their peak freshness.

So on my first visit, I walked around and only found one Eastern Fringed Prairie Orchid - but it was in a pre-blooming stage (see photo above). The flowers had not emerged.  I figured I would wait about a week and go back. Unfortunately, I went back this week and had a hard time finding the orchid from the previous weekend.  I knew something was wrong when I couldn't "see" the orchid in its expected spot.

I think this plant might have been victim to herbivory - the act of a plant being eaten by animals. There were deer and racoon tracks around the area. Its disheartening to see herbavory and phragmites infestation take place in this habitat.  Hopefully, this plant gets a better chance next year if its roots stay intact. 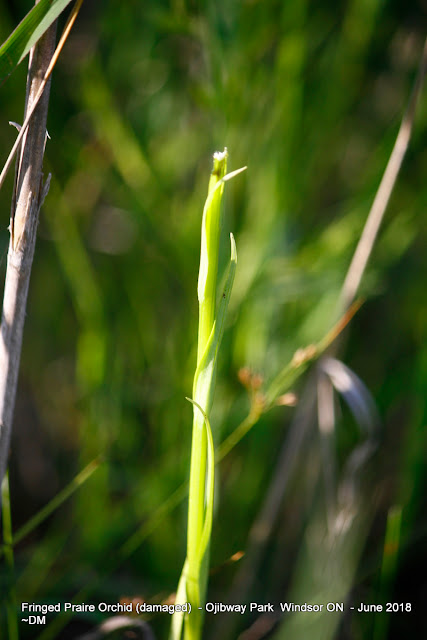 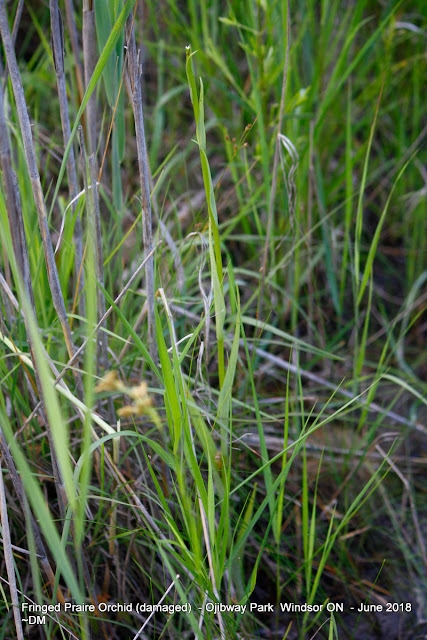 I've included a few other photographs from that habitat which was being taken over by Phragmites. Collicroot and some unidentified sedges and rushes that were noted. 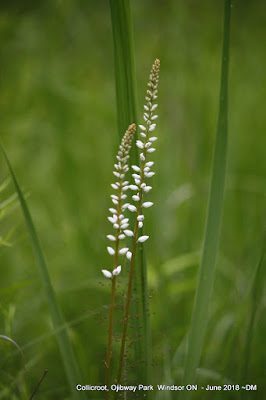 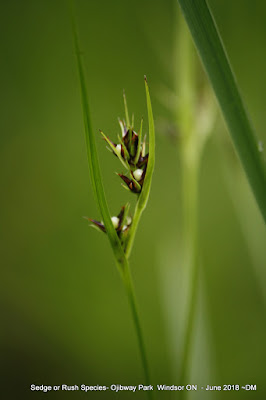 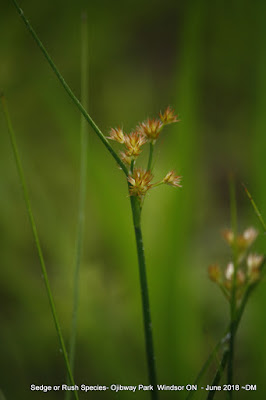 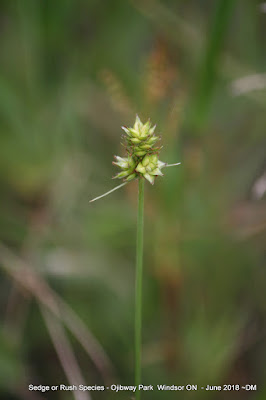 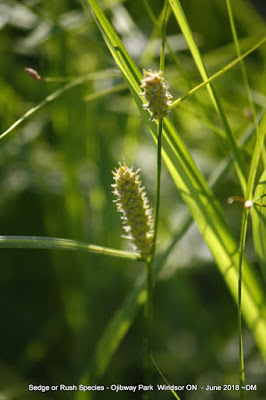 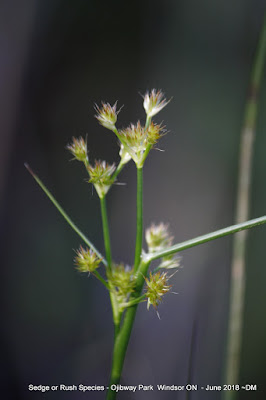 Posted by dwaynejava at 1:13 PM No comments: 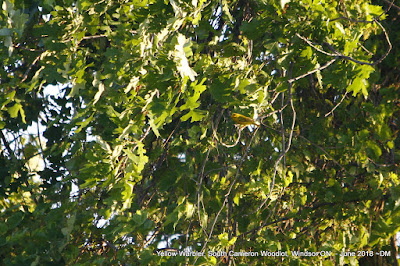 The last few weeks have been too busy - work always seems to pile up in June for me which is unfortunate because June is just such a beautiful month for nature discovery.

One neat thing that I realized while sitting in my back yard recently is that Yellow Warblers are breeding in the hedgerow behind my house. Of course they are not level-6 mega-rarities, but still, its neat to hear them singing or occasionally --- briefly see one perched and singing on my back fence. Song sparrow, Robins,  Great crested Flycatcher, Grey Catbirds, House Wrens, Wood Thrush (from forest) and ever present Brown headed Cowbirds are singing constantly.

A recent walk to Brunet Park in Lasalle proved to be mildly interesting. I had noted Common Ringlets, Silvery Checkerspot, Baltimore Checkerspot and even brief looks at Nessus Sprinx Moth which was nectaring off Indian Hemp and the invasive Crown Vetch. The Nessus Moth was a lifer - I had seen the Clearwing and the Snowberry sphinx moths in the past this was a pleasant lifer for me. 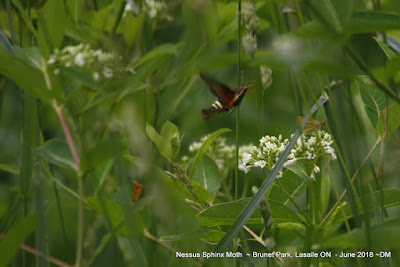 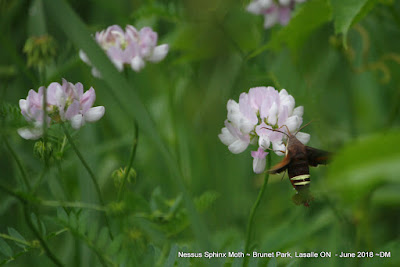 I noticed that the power-line right of way (at Brunet Park) was cleared as well as some thinning out of the Massasauga Habitat at Brunet Park. I was hoping to come across some Orchid species but fell short. I did see a plant that was somewhat interesting plant that I'm starting to recognize and appreciate a little better now - Whorled Loosestrife! Later at Ojibway Park - I had seen another plant I was hoping to see - Winged Loosestrife.  Its interesting to look up terms "Whorled" or "Winged" with respect to botany because up until now, I would hear these names with repetitive adjectives but did not understand what they meant. Winged for example refers to an "X shaped" cross section of a stem, and Whorled means plants that have leaves or flowers radiating from a single spot on a stem. These adjectives make sense once you acknowledge their meaning. 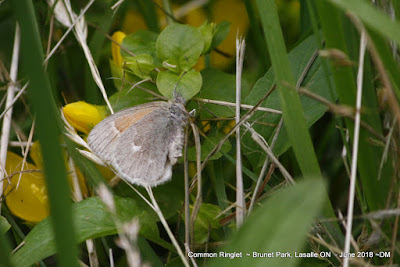 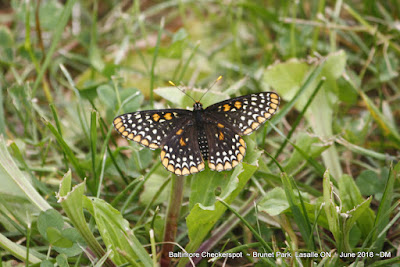 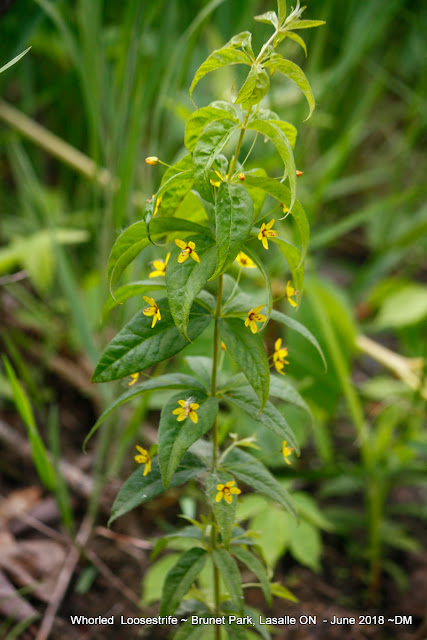 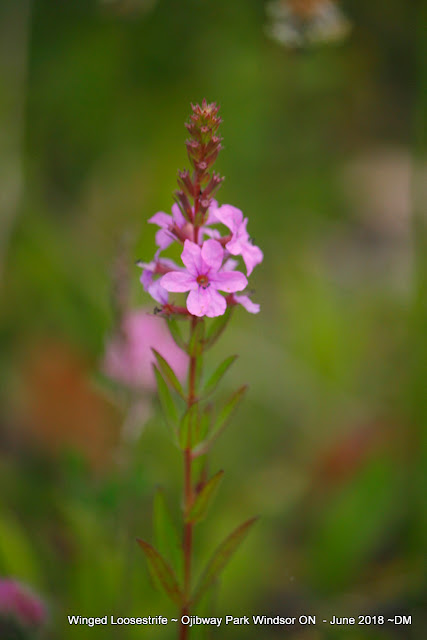 Posted by dwaynejava at 9:17 PM No comments: