It funny how cyclical birding can be. Year after year, give or take a few days or weather patterns, you have this cyclical repetition in nature...So predictable, you can literally ask ... "Whats in season this week?" Its amazing though. Last year on the last weekend of September, I had an amazing day on the marsh boardwalk, and this past week...So quiet (1 GBH and 2 Wood ducks)!

I left the marsh boardwalk noticing (maybe for the first time) a large patch of invasive Phragmites in the marsh. I always seem to smile if I drive by a ditch or highway edge and see native cat-tails and conversely, I get bothered to see phragmites knowing how invasive it is. I was alarmed to see this patch of phragmites in the middle of the marsh. It would be cool if Point Pelee could burn off this small patch before it gets larger... I'm not a botanist/ecologist so maybe I need not worry about it. 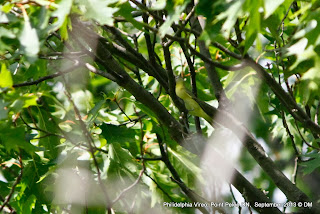 The last two weeks have yielded few noteworthy birds. I have been bringing my son with me out birding though, so maybe I'm a little more distracted or unable to really cover all the ground I'd like. I think this photo above is of a Philadelphia Vireo. 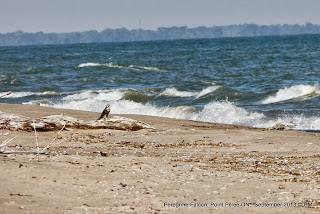 Another highlight from Pelee was this Peregrine Falcon perched on some driftwood along East Tip beach near sparrow field. Raptors were everywhere overhead. My time at pelee this weekend was very short, and sadly, I didn't connect with too many of the rarities that had been seen.

At Holiday Beach this past Friday, I almost stepped on this small earthworm-sized Fox Snake. I had thought momentarily that I might have photographed a Massassauga Rattlesnake, but that would be impossible. They are extirpated from Southwestern Ontario with the exception of a few that are very localized at Ojibway Park. Cool to still see this fox snake. I felt bad though, shortly after seeing this one, I found another one down the road that had been run over by a car. A road-killed garter snake was also seen along with a dead Monarch caterpillar. [***Bonus: Guide for the confusingly similar Fox, Massassauga and Water Snakes of Ontario] Butterflies have been depressingly absent this year as usual, but a dimorphic pair of Eastern Commas were very cooperative along with a Tailed Blue and Bronze Copper. 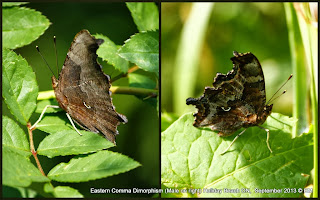 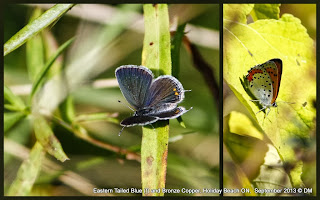 Closer to home, I was looking at Checkered Skippers again near my work and amazingly a Cicada landed on me! Don't get me wrong, I'm not one to pick up bugs but I must say I was amused and took this self-portrait with this bug on my pants.

A Greater Angle-Wing Katydid was crossing the sidewalk this evening while my son drove his jeep to the park. Amazingly, my son's Power-Wheels Jeep ran direcly over this bug leaving it to see another day. This Katydid is responsible for the Click-Click-Click sound one hears emanating from trees during late summer nights in Southwestern Ontario [range map]. This brilliant leaf-mimick is almost impossible to find unless it perches on a house, door, car or sidewalk in this case.

Good birding!
Dwaynejava
Bonus Footage (baby fox snake on youtube--- This is not me :-)  ): 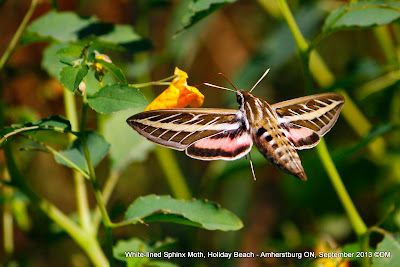 This weekend, my son and I were on the Holiday Beach Migration Observatory hawkwatching tower, when from the bottom of the tower, Paul Pratt & Bob Hall-Brooks called up that a White-lined Sphinx Moth was being observed. Having seen the Clearwing Hummingbird Moth and the Snowberry Hummingbird Moth earlier this summer, I was eager to catch a glimpse at a third species of Hummingbird Moth: The White-lined Sphinx Moth! This moth was huge! Its wingspan spans 3-3.5"! The moth was attracted to a giant patch of Jewelweed. 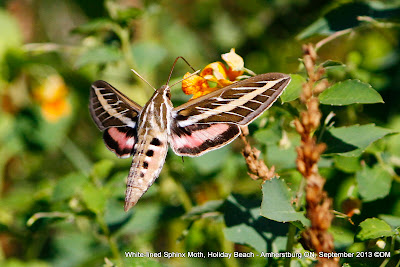 Its funny though, my friend Rick Mayos had recently sent me a photo of a Nessus Sphinx Hummingbird Moth that he had taken in his backyard.  Along with the photo, he sent me this article summarizing the four major "Hummingbird Moths" [link]. This dialog started Rick and I on a summer-long discussion on the various moths and butterflies we were seeing.


Naturally, I texted Rick a photo of the White-lined Hummingbird Moth by taking a photo of it off my camera's preview screen with my cell phone. He had never seen this fourth hummingbird moth... until he looked out his window and found one on his butterfly bush in his backyard just minutes after seeing my text message! This means Rick has achieved the holy grail of mothing... 1-Clearwing, 2-Snowberry, 3-Nessus and 4-White-lined moths ...The Grand-slam*** of hummingbird moths! I myself am one species short of this noble achievement... I still need to glance at the Nessus Moth to make that bold claim :-).

Hawk-watching at HBMO is always good during the fall. Its been a tradition for me to go out to HBMO at least weekly during the fall raptor migration season. Some birds seen this weekend include: Bald Eagles (6), Merlin (8), American Kestrel (10), Sharp-shinned Hawks - (25), Northern Harrier (1), Red tailed Hawk - (2), Broad winged Hawks (100's)... and the season is just beginning. There must be at least 40 species of ducks/geese/swans on any given day along with the passerines (Jays, Waxwings, Goldfinches) not to mention warblers, vireos, wrens and Gnatcatchers. (I should be putting this all into ebird... I know.)


Bronze Coppers were abundant at Holiday Beach as well. Bronze Coppers can be abundant around smampy marshes and wetlands as their larval foodplant -Curled Dock is abundant in marsh habitat. Singles of Common Buckeye and Monarch were also seen... Still no Grey Hairstreaks this season!

*** - (Nerdy blog readers will recall when I had a "chickadee grad-slam" two years ago: Chestnut-backed, Mountain, Boreal and Black-capped [link])

Baird's on the Beach

(Editors Note: This posting is about 1 week late. I was going to post it last week, but just couldn't hit the 'publish' button until tonight.)

Baird's Sandpiper on Pelee's East Beach
This past Saturday morning (Sept 7th), my son and I went to Pelee to see if we could find any interesting birds or butterflies.  We parked in the VC parking lot and soon found a worn Tawny Emporer fly by and perch on a nearby shrub. Later, while walking through Sparrow Field, we noted few butterflies other than Cabbage Whites! It would have been nice to see a Grey Hairstreak or Cloudless Sulphur, but no such luck. Going out towards the east beach from Sparrow Field, a large group of gulls were seen, along with a distant shorebird.  Long story short, a nice Baird's Sandpiper (see bottom right of photo below) was there. Just as I was noticing the first shorebird through my binoculars, I noticed it was joined by a small flock of 7 Sanderlings... Then quickly flushed by my 4-year old son! 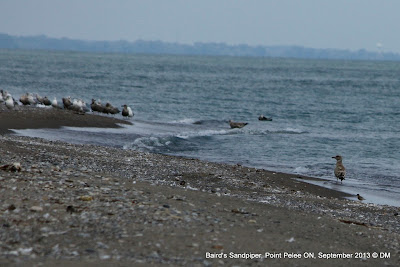 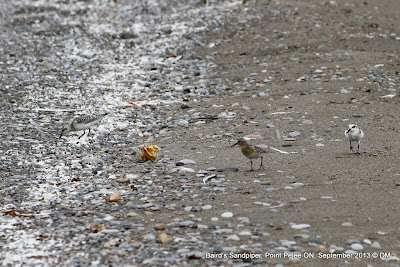 Marbled Godwit at Harrow
An Ontbird posting on Saturday night revealed that a Marbled Godwit was at Harrow SL. Sadly, most Essex County Lagoons are locked up like Alcatraz. Unlike Blenheim, Port Stanley*, Ridgetown*, Tilbury, which allow birdwatchers to view migrant shorebirds (and sometimes are progressive enough to offer viewing platforms*), to my knowledge, Essex lagoons are locked to the public. Its ironic that Essex does this, but then tries to sell itself as a "Birding and Nature" tourism destination. 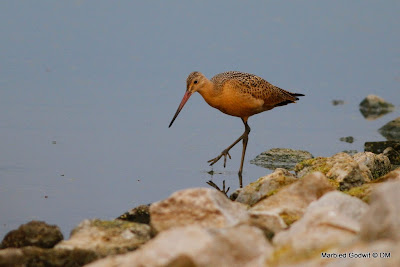 First of Year Checkered Skipper
As I was putting some books into the trunk of my car this week, I noticed a small blueish-brown butterfly alight onto a white clover plant adjacent to my car. A closer inspection turned out to be a first-of-year Checkered Skipper! I followed it for a minute and noted that it soon flew into a 'whirl-about' with another Checkered Skipper. There must be 6 or more butterflies at this one parking lot alone (alongside a clover filled courtyard).  I assumed these were recently arrived migrants but Alan Wormington informed me that they are resident in Essex County, and west Windsor has lots of ideal habitat: disturbed, industrial areas with potential for its larval foodplant: Mallow. A cool thing about this butterfly is that it is very common in the Southeastern US but drops off (non-resident) north of the 40th parallel [more on common checkered skippers]. 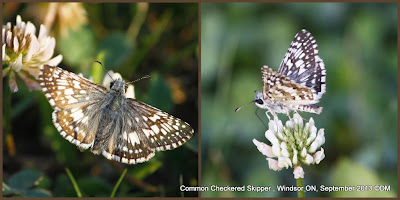 I have some cool Holiday Beach hawk-watching photos to share. Stay tuned!

Update*** --> Could this Tawny Emperor be a record breaking late record??
Photographed Sept 7th near the PPNP VC parking lot. 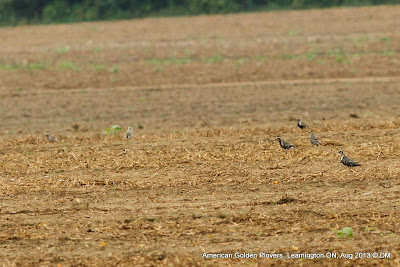 Somehow, I think of Labour Day weekend as the southbound migratory equivalent of May 15 in the Spring. This past weekend, I was able to get out to Point Pelee with Jeremy Bensette to follow up on some cool birds that had been reported on E-bird. One highlight was seeing a bunch of American Golden Plovers near the intersection of Hwy 3 and Talbot Trail. Later, the onion fields were quiet for Jeremy and I, but we did spot two Merlins in a dog fight near Rd E and Rd 19.

We checked out NW Beach of Pelee next. JB found the cutest little baby turtle. It was so small, the shell was about the size of a nickel or quarter. The images below have a dime next to the turtle to provide some scale for size perspective. If you look closely, you can see the turtle has a sharp stone-line object on its nose. I think this is its "egg-tooth" which is an adaptation that allows the turtle to cut through its shell upon hatching! 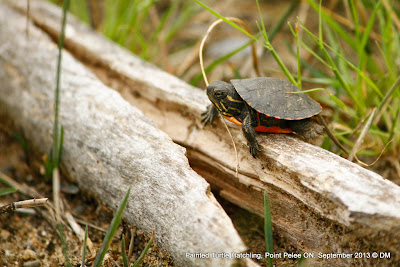 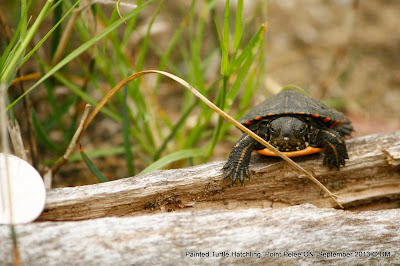 Kory Renaud had found a female Prothonotary Warbler at Blue Heron so Jeremy and I went to join him in re-finding it. Josh and Blake met up soon after for some great birding and was topped up by a nice bbq lunch provided by Kory. Blake noticed the prothonotary as we were finishing up our lunch!  Some warblers I saw at Blue Heron include: Blackburnian, Black and white, yellow rumped, Cape May, Tenessee, Bay breasted / Blackpoll Warbler, Chestnut sided (juvenile), Prothonotary, , American Redstart, Magnolia Warbler,  Warbling and Red-eyed Vireo, Osprey (overhead), Trails Flycatcher, Least Flycatcher, Eastern Phoebe, and I'm sure I'm forgetting some.

Tonight, after work I kayaked the pelee marsh. It was much more quiet than just a week or two ago. No black terns today. Two Sandhill Cranes, 3 SBD's, 1 White-rumped, 6 Juv Semipalmated Plovers, a pectoral limping around with a damaged leg..... see my ebird report for today... No mega rarities, but watching this group of 10 or so warblers shorebirds from 5 feet away in a kayak was incredible (will post video soon..Phone is dead). 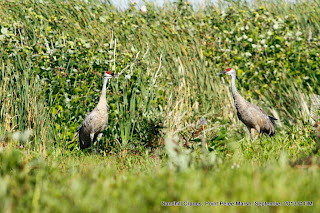 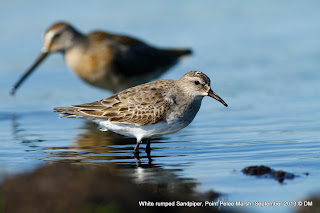 Jeremy texted me as I left the park that he had a Red-necked Phalarope and a Baird's sandpiper at a little stormwater pond near Hwy 3 & Talbot Trail. I had assumed this pond was not productive as it seems very deep, but it seems there were some decent shorebirds tonight! 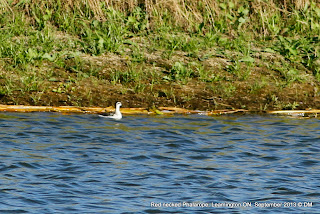 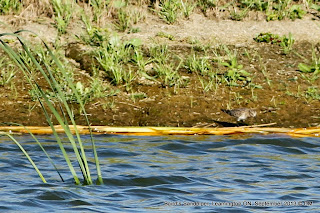 The Baird's was poorly photographed by myself but Jeremy has great photos (I will try to get his and post them here). It has long primaries extending past its tail, a scalloped appearance in the back of the bird along with white-outlined feathers on its lower scapulars are distinctive. It had a long, straight black bill, black legs, buff-brown colour impression. It even has a white patch of feathers in front of its eyes, which is a subtle feature of juvenile Baird's Sandpipers. Nice find JB!!! 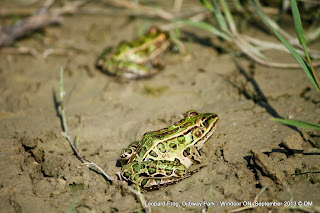 Posted by dwaynejava at 10:37 PM No comments: