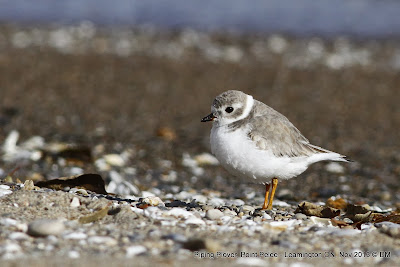 This morning, I had heard my phone chime as new email had come in. Classically conditioned like Pavlov's dogs, I instinctively checked my email to see that Steve Pike and a Local Leamington Birder who goes by the name "afternoon shift" posted a Point Pelee peninsula Piping Plover! Much to the chagrin of my wife and two kids I kissed them adieu and fled to the southernmost point of Canada. Upon arriving to the tip, Jeremy Bensette hinted that I might best walk to East Tip (not East Beach!) through Sparrow Field. There it was, in perfectly front-lit perfection! At one point, we heard it singing or 'piping'! This little flufball of cuteness was for many years (and still is) "Endangered" because its preferred habitat is big wide sandy beaches. If you have a few minutes check out this amazing link documenting the life and habitat of the piping plover: http://www.audubon.org/plover 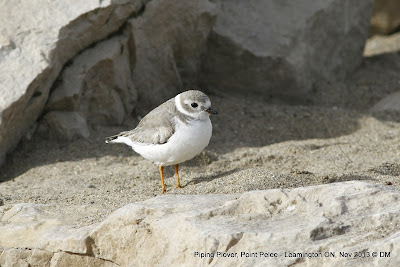 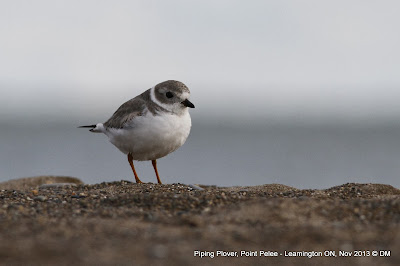 It soon fled from East Beach upon Kory's arrival to see the bird. But we agreed it probably flew back to the tip, and that guess was correct. At one point, a few birders were laying down on the sand to get better photos and I had noticed a lady with a dog was walking by - Did she think we were nuts? It just so happens that staying low to the ground lets you separate the bird from its background, making the bird jump out from its Gaussian-blurred background.

A couple of other cool birds seen today were four Tree Swallows (sitting on the sand!), an Eastern Phoebe, and a Long Eared Owl! 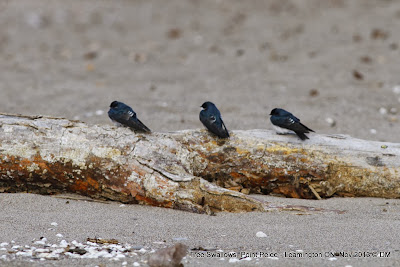 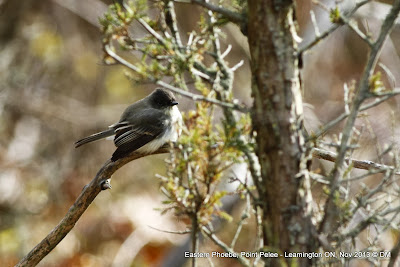 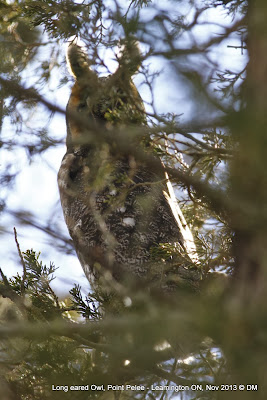 Last weekend, I tried to get a Purple Sandpiper at Pelee's Tip but dipped. I did get a breathtaking look at this Eastern Screech Owl... A dirt bird at Pelee but still amazing! 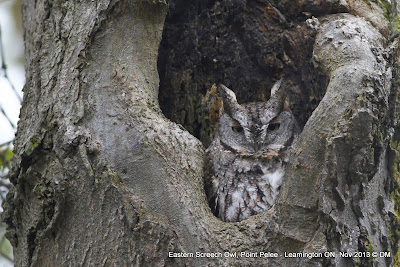 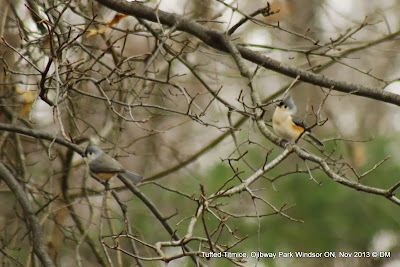 Tufted Titmice are easy to see at Ojibway Park during the late Fall and Winter months. Always fun to see these birds!

Well, its official: I hosted my first Owl Prowl this week. Not wanting to bore anyone with too many details, I could say:
It was suggested to me that an Owl Prowl would be a good event, so I ran with it. Myself along with four group members were tasked with either selling ten - $10 tickets or getting 'sponsored/pledged' for this owl prowl. I'm proud to say that I have $635 in hand ready to donate to ERCA. $635 may not sound too impressive, but hey, its not easy getting $635 in a box all in the name of charity.  I owe much thanks to many of the nature loving community for their patronage.


I figured I might try to embed the PowerPoint that I made for the informational component of the Owl Prowl below for those who might be interested in some interesting owl facts... (I made this in Google Presentations, converted it to MS PPT, then back to Google Presentations, so it may have gottent screwed up a little).

I've learned a lot about Event Planning and Groupwork while implementing this event. Regarding event planning, anything that could go wrong will. Unforeseen politics even found its way into this event. Regarding groupwork - has anyone experienced a positive outcome while working in groups in a post-secondary setting? I have not yet had a good experience personally. This meme says it all...

So did we see an owl? At Devonwood no. Some heard an owl though. On an alternative night/location a small group of five did see and hear Screech Owls. Pretty cool!