There's an old saying in Michigan that goes like this: If you seek a pleasant peninsula, look about you! How true it is. I had two "bucket list" nature goals that have been bugging me - I wanted to really make an effort to see a Karner Blue butterfly, and I also wanted to see a Kirtlands Warbler in its breeding territory - Crawford County Michigan (Greyling Michigan). The Karner Blue is extirpated from Ontario [ROM link] and is endangered in most of its remaining range [see range map here]. One area that hosted the Karner Blue Butterfly was in Port Franks - Just north of the Pinery Provincial Park.

I did not have much time to search for the Karner Blue butterfly so I stopped at one location that almost promised to host this endangered species: Michigan Nature Association's Karner Blue Sanctuary in Newaygo Michigan. Looking around, we saw many Monarch butterflies, some singles of American Copper and Grey Hairstreaks. I could have spent the afternoon at this sanctuary but almost upon finding my target species, my son declared that he had to go to the bathroom... So I tried my best to capture this rare butterfly with a brief 10 or so minutes of photography. This was the best I could do in my brief 10 minute stay... Oh the joys of parenthood!  The Karner Blue Sanctuary was beautiful ... but sadly, it was being overrun with Spotted Knapweed, an invasive flower that chokes out native plants... such as Wild Lupine.


Next stop was Greyling Michigan, which hosts the Kirtland's Warbler. A quick check of E-bird will give you some ideas of where to look. This bird was found pretty easily in a special forest of young Jack Pine trees with man made open areas.


When visiting Greyling, or any part of Northern Michigan, I think a good afternoon activity is to Kayak a local river. In Greyling, they have a beautiful, clear, meandering river called the Au Sable River. My son and I rented a two-person sit-on-top kayak and kayaked for about 2 hours down this river. Surrounded by nature, with towering white pines and singing Pine Warblers, It was beautiful!


We also visited Traverse City Michigan for a few days. One highlight of Traverse City is its proximity to Sleeping Bear Dunes. Sleeping Bear Dunes is one of the most beautiful beaches in North America and is a stonghold for the great lakes population of Piping Plovers. According to USFWS: "In 2008, there were 63 breeding pairs (126 individuals) in the Great Lakes region. Of these, 53 pairs nested in Michigan, while 10 were found outside the state, including six pairs in Wisconsin and four in Ontario, Canada. A single breeding pair discovered in 2007 in the Great Lakes region of Canada represented the first confirmed piping plover nest there in over 30 years, and in 2008 the number of nesting pairs further increased to four. In 2009, a pair of piping plovers nested on the Lake Michigan shoreline in Illinois, the first nest in Illinois in 30 years" (USFWS).  I did attempt to visit one particular area where ebird had a sighting just days before my arrival (July 27th) but I was unable to find a piping plover at the Platt River Point area. A quick look at Ebird for Piping Plovers this year hinted that there were at least five sites in this park alone with breeding Piping Plovers.


Just one last point - I couldn't help but notice beautiful pink flowers everywhere you look in northern michigan - the fields and roadsides all have this nice pink hue. Sadly, its Common Knapweed though, an invasive plant that chokes out native vegetation. Three ways that this plant is thriving: 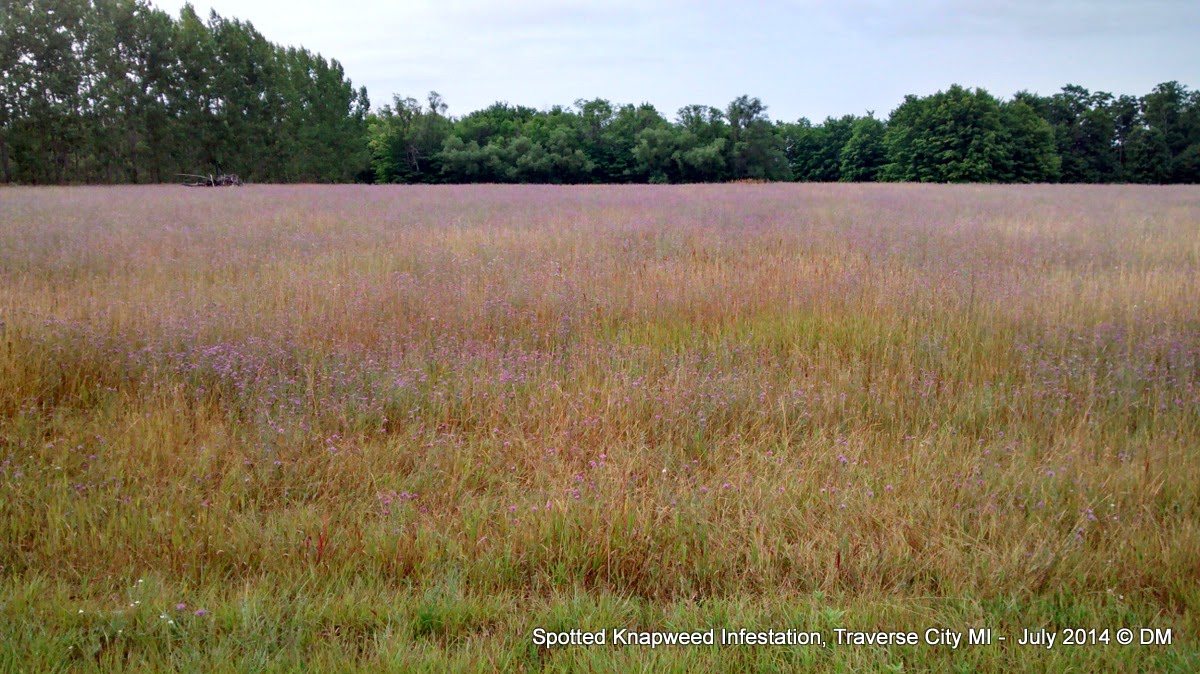 This plant was in the news at Point Pelee a few years ago, but now that I've seen how invasive and aggressive it is, I think its a good idea to get rid of this plant sooner then later.

To end this long posting, I had a great trip to Michigan and wanted to share some of the nature-based highlights of my trip. The northern half of the the lower peninsula of Michigan is so beautiful. Driving through the Manistee and Huron forests is breathtaking and its just hard to realize how much forest and wetland are still intact. Seeing the Karner Blue butterfly, even for a  fleeting few minutes was one of the best nature discoveries of the year for me.