About two weeks before departing for a long-planned Florida trip, I had read on the Florida birding listserve that a Vermilion Flycatcher had been spotted at a place called Orlando Wetlands. I read this announcement with amazement, but caution as well, because realistically, chances were slim that it would stick around for two weeks, awaiting my arrival. Further compounding the excitement of this bird was the lack of mention on the Florida birding listserve beyond its initial posting. Sure enough though, after our plane landed in Orlando, and we headed due East to Cocoa Beach, I requested to my wife that we stop and check it out (I pre-programmed the address into our GPS) and to my utter amazement, it was still there! 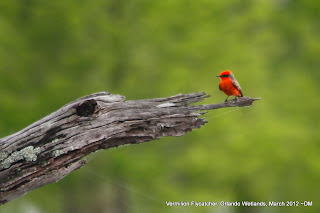 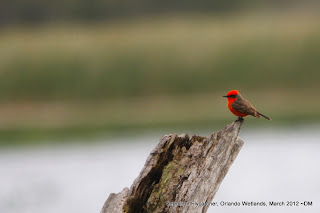 Late Limpkin
While at Orlando Wetlands, I saw many other species, but I focus mainly on personal rarities. Blue Winged Teal, Common Moorehen, White Ibis, American Coot were very common and seen everywhere. Near the feeders, I swore I saw a red-ish colourful bird that could have been a Painted Bunting, but I didn't have time to follow up on it.

It's good to be home. Florida is so beautiful, but home is where the heart is. It was cool to hear the distant call of Killdeer, and later hearing the chorus of frogs while stopping the in-laws in Windsor. Spring is here!