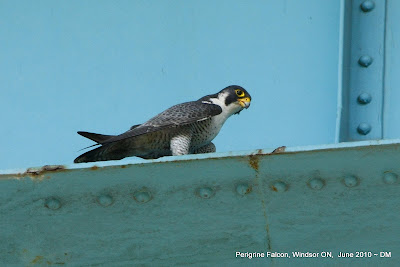 Earlier today, I was reading the Windsor Star, and came across an article about fledgling Peregrine Falcons on the Ambassador Bridge... at the exact same spot they were last year. So, I figured I would check it out. The article by the way is here:  (http://www.windsorstar.com/technology/Falcon+fledglings+flying+coop/3168085/story.html)

I must say, this is an easy bird to see. There is a volunteer group of birders that will show you where they are. The group calls themselves peregrine falcon-watch. Pretty cool. I did not see them there last year. They will even inform you on when they are sleepy and when they start to fly around more. 5pm is a good time to go and see them, they were even pretty active at 8pm. I was there at 3pm and they were all sleeping on ledges that obscured their view. It seems they only posted this article after the baby falcons successfully fledged. 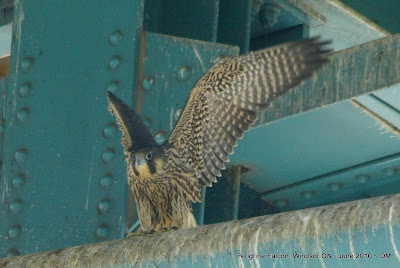 There are 5 Peregrine Falcons to look at, but you might only see 1-3 at a time. The two parents are obviously more mature and have yellow eye rings and beaks. The male (father is the first photo... in honour of father's day) is smaller and the female is larger which is common in raptor sexual dimorphism. The three babies all have blue-ish beaks and eyerings.

*Peregrine Falcons range in size from 36 to 49 cm (14 to 19 in.), and females are generally about a third larger than males. 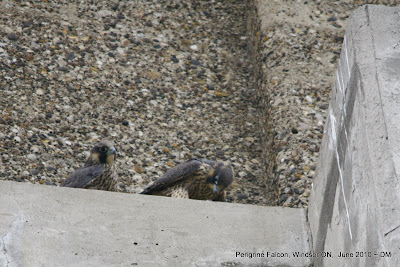 I took my wife and new son to look at the falcons after dinner tonight at 8pm-ish, and it was pretty cool. Two of the babies were flying around the bridge, and being very playful. At one time, I watched them wrestle in the air and interlock talons as I've seen Bald Eagles do. 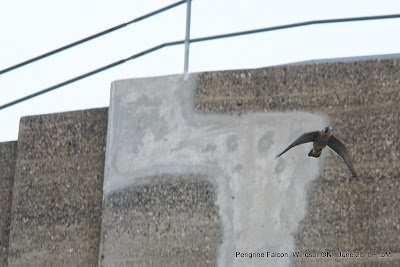 Overall, a very cool raptor, very easily seen in West Windsor. I might go back over the next few days and see if I can get better shots. I wonder if these guys are going to discover Point Pelee in the fall and chase around some of the migrant birds? That's how nature goes.