Birding the Okanagan Valley near Penticton BC 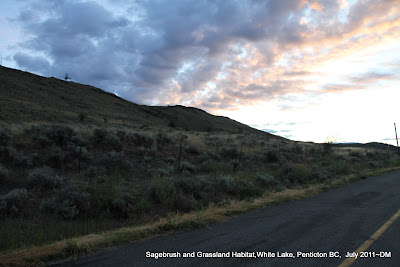 After seeing Lewis's Woodpecker and California Quail on the previous day, I was excited to get out and bird the Okanagan Valley. I picked up a book from a bookstore called "The Okanagan Valley Birding Trail" which was a beautiful colourful and informative book, put together by people that really love birding. If you go to the area, I recommend getting a copy. 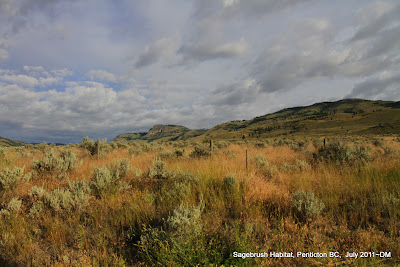 I woke up at 5am and headed out to the White Lake Area to watch the sun come up over the mountains. As I drove, it was still cold out and I had my windows open so I could hear the birds chirping. The air was clean and crisp and was kissed by the scent of flowers and sage, just beautiful to behold. I've attempted to photograph this beautiful habitat but a photo rarely does justice to being there.

The first bird I discovered was Lazuli Bunting, which looks and sounds alot like our local Indigo Bunting. I found it by stopping my car when I heard it singing and I would pull over and pish it into view. My first shots of this bird where at 6am and in a tree. I went back later to get a better shot in better light. It really responding to my house-wren scolding call! 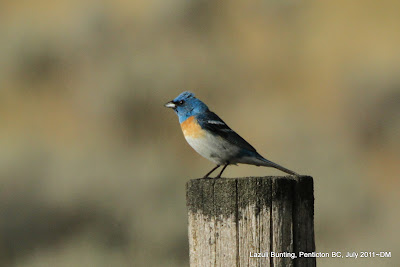 Next, as I drove along the road, I would just stop and inspect anything I saw or heard. I next saw a tree-full of Evening Grosbecks, birds I've never seen before either. It blew my mind to see them because I was not even expecting to see them. 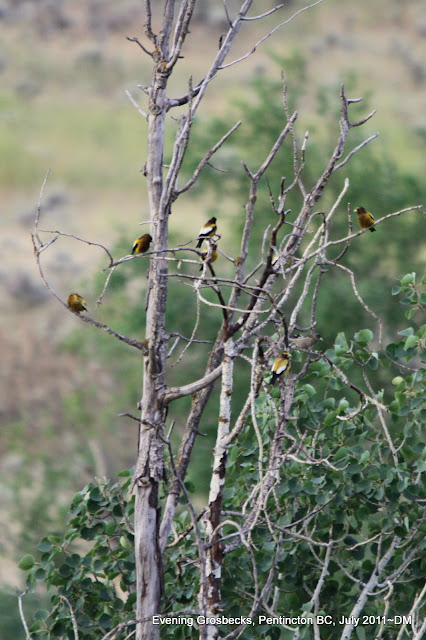 I checked out a small woodlot that was producing woodpecker knocks... could it have been a White-headed Woodpecker? I'll never know because I was about 100m from the woodlot and there was barbed wire fencing along all the roadsides. The same thicket of trees that produced the Grosbecks had a Western Kingbird just moments later. Sorry about the quality but most of these shots are from 100m away and heavily cropped. 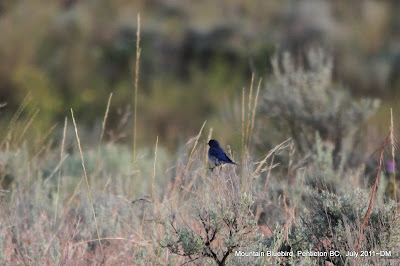 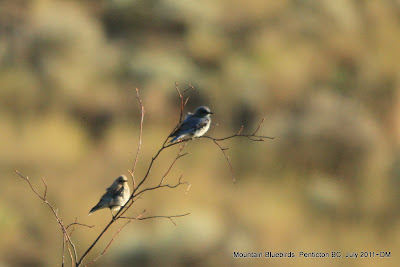 Mountain Bluebirds were seen next. I must have seen three separate occurrences of them, but did not get good photos of these beautiful birds. Say's Phoebe and Lazuli Buntings were in the same area along with Western Meadowlarks seen below: 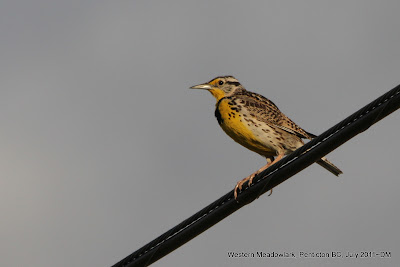 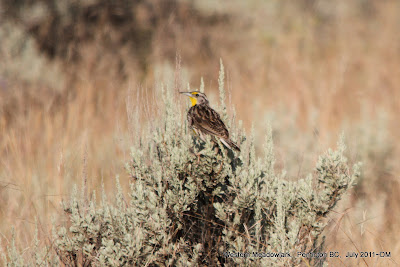 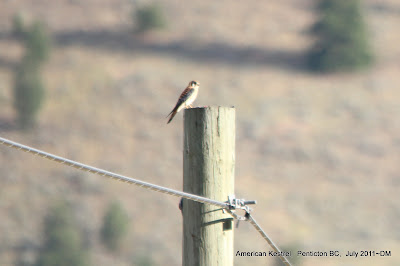 Driving back towards Penticton, I stopped next to a treed hillside with Ponderosa Pines and various coniferous trees. Again, I stopped because of the amount of bird song. The Ponderossa Pines reminded me of the Red Cockaded Woodpecker Habitat back in Florida. 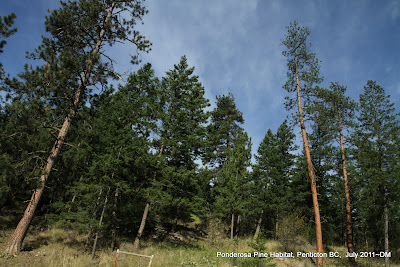 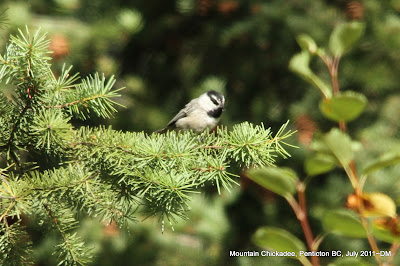 Mountain Chickadees, Yellow Warblers, Western Pewees (which look a little like Olive-sided Flycatchers) and hummingbirds (I could not lock focus on it)... where easily seen here as well. Speaking of Chickadees, do you think I was able to get a "Chickadee Grandslam" while spending a week in BC? Stay tuned,,, You may find out that I've achieved the holy grail of birding!!! 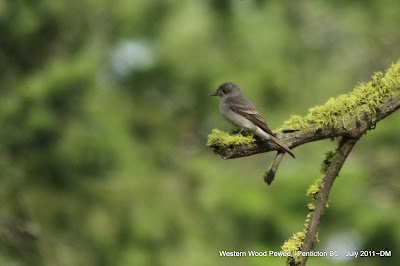 A mid-afternoon drive in the area produced nice views of Western Bluebirds (note the blue chin as opposed to the rufous chin of Eastern Bluebirds). These Bluebirds were at a Vineyard called "See Ya Later" based on the owners deceased dog, who is prominently buried in the front of the ranch, gravestone and all. We stopped in for a winetasting and I asked the owner about the surrounding nestboxes. He new nothing about the birds except that University students were studying them. A metal plate on the nestboxes indicated a western bluebird trail/project, and sure enough, Western Bluebirds were around to be seen. This one posed nicely in the "See Ya Later" ranch parking lot. I picked up a bottle of their Gewurztraminer which was my favorite during the tasting. 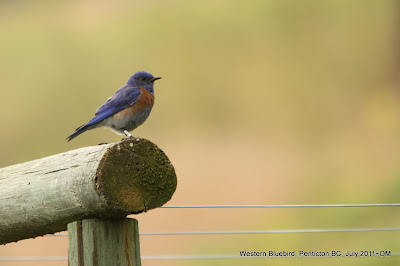 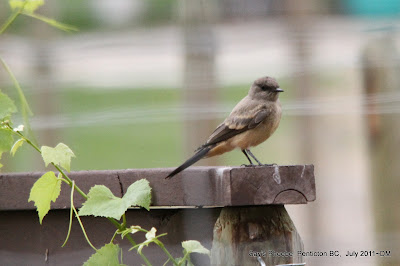 Say's Phoebe ...How cool is this? Easily seen all morning!

I don't know where you are in your birding journey, but I hope you enjoyed this posting. I was personally blown away at all these life list additions, in a new habitat that I have never seen.  I blogged about this trip because without posting these images, they would get lost in a hard drive and the trip soon forgotten.

A side note about this area is that there were many signs around stating: "No National Park". I'm not too knowledgeable about the issue but if Canada was to make this area a National Park, I think they would be preserving an incredible habitat. Even the motel owner in Penticton knew little of the issue, but wants to see more development. He did not seem to agree with me that if the area was to become a park, many people for generations would be able to visit and prosperity could be had from preservation. I see it as an issue of short term interest of local landowners vs long term interests of society in general.

The Nature Conservancy had many signs around the area stating that they owned large tracts of land, but other tracts were for sale, which I find sad but probably inevitable. Some related history with Point Pelee that I'm aware of is that when the Government wanted to make it a national park, many landowners protested. They did not want change, but as time went on and the park was nationalized to protect and foster the habitat, I think everyone agrees that it was better protected as a park. I see the same tension with Rondeau Park and the Cottagers Association. Cottagers do not want to leave even though the 100 year lease agreements have expired. I hate to end this posting on a potentially political/inflamatory note, but I hope this habitat is preserved!

Posted by dwaynejava at 1:44 PM