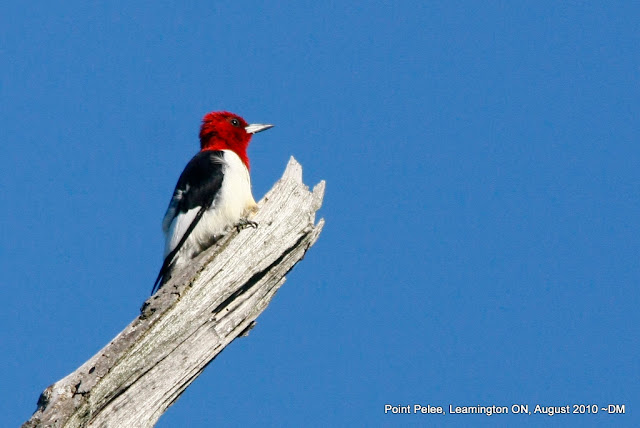 I birded Point Pelee this morning, and wow, what a morning! I started my trip to PPNP by stopping at Pelee Wings and testing some binoculars. As I was looking at a pair I was considering, I heard a Red Headed Woodpecker outside! Two were around, one juvenile and one parent. What a great way to test out a pair of Bushnell Ultra-HD's!!! I did not buy the binoculars though,,, I don't know if I can handle my sigma 500 and a pair of 10x42s. My camera lens is almost as powerful as the binoculars. But, seeing the RHW in full 'stereo' vision was really nice.  It's pretty well my favorite bird. I might save the bino purchase as a Christmas gift (If santa is listening...).

I moved on into PPNP and started off at Delaurier Trail. The brushy area west of the parking lot had many birds, but Great Crested Flycatchers, Cedar Waxwings and Blackburnian Warblers were the highlight.

Then at the beginning of Anders Footpath, I hit a really nice pocket of foraging warblers. I must of stood there for 20 minutes. Most of the warblers mentioned in my list below were right here.

Then, near the Octagon and sloughs of the trail, I spent 30+ minutes. It was extremely birdy. Vireos, Flycatchers, warblers, thrushes, waxwings everywhere. Hummingbirds and BG Gnatcatchers as well. I saw a Wilson's Warbler here, which was pretty exciting, because I only saw this once in May, and had a poor look at it.


The area 100m on each side of the octagon was really, really birdy. There were many bugs and ripe grapes and various berries which were attracting the birds. 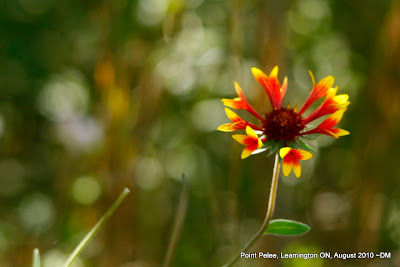 After Delaurier, I walked the Woodland Nature Trail at PPNP and well, it seemed much quieter. I did see a Northern Waterthush near the dry sloughs though. It was cool to see it teetering on a low branch. It was right where I saw it in May. I heard Overnbirds but could not spot them. What a wonderful morning though. So many birds, and every 3 minutes, a flyby of a Monarch butterfly, or Swallowtails, or Red Spotted Purples.


I was going to upload about 5 Flycatcher photos today. I think there is some 'lifer' potential buried in these photos. I would like to learn the calls and have the joy of distinguishing them by ear next year. I still struggle to differentiate them.